Wizards' Beal out to start new streak versus Knicks 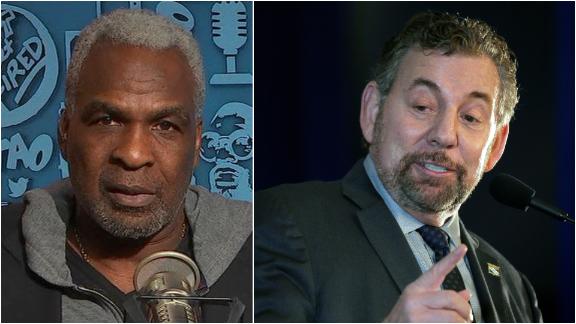 If the New York Knicks want to get ideas of how to contain Bradley Beal, watching film of how the Miami Heat recently defended him may be a good strategy.

Coming off his first game of fewer than 25 points in nearly two months, Beal looks to get back on track Tuesday night when the Wizards host the Knicks, who are coming off one of their best defensive games of the season.

The streak ended Sunday night in a 100-89 home loss to Miami when Beal scored 23 points and shot 8 of 24 as the Wizards matched their lowest point total of the season.

"We just got stagnant. We've got to keep moving. I feel like, a lot of times, we were just kind of just watching me. We can't get caught up in doing that," Beal said. "They took away all my drives, everything pretty much toward the paint. They wanted to kind of force me to shoot jumpers all night."

Beal is right as he attempted 16 shots from distances of 16 feet or more in Sunday's game when the Wizards shot a season-low 33.3 percent.

New York is coming off a 3-2 homestand after getting wins over Chicago, Houston and Detroit sandwiched around losses to Utah and Oklahoma City. The Knicks won high-scoring games over Chicago and Houston and then used defense to post a 96-84 victory over Detroit on Sunday night.

The Knicks produced some of their best defensive numbers Sunday as the 36.3 percent shooting allowed was their fourth-best total of the season and their 84 points allowed were their second-lowest of the season. New York also had 10 steals and outrebounded Detroit 51-35.

"One thing we talked about is that any defensive team has to have a set of rules and you play by those rules so you can play together," Knicks interim coach Mike Miller said. "I thought we were pretty connected tonight. I was pleased with the effort, staying with the defensive side and trusting that and allowing the defense to help create the offense."

Julius Randle posted his 29th double-double with 17 of his 22 points after halftime to go along with 12 rebounds while Elfrid Payton delivered another steady game with 16 points and six assists.

Randle has five double-doubles in his last six games while Payton is averaging 18 points and 7.7 assists in his last three games.