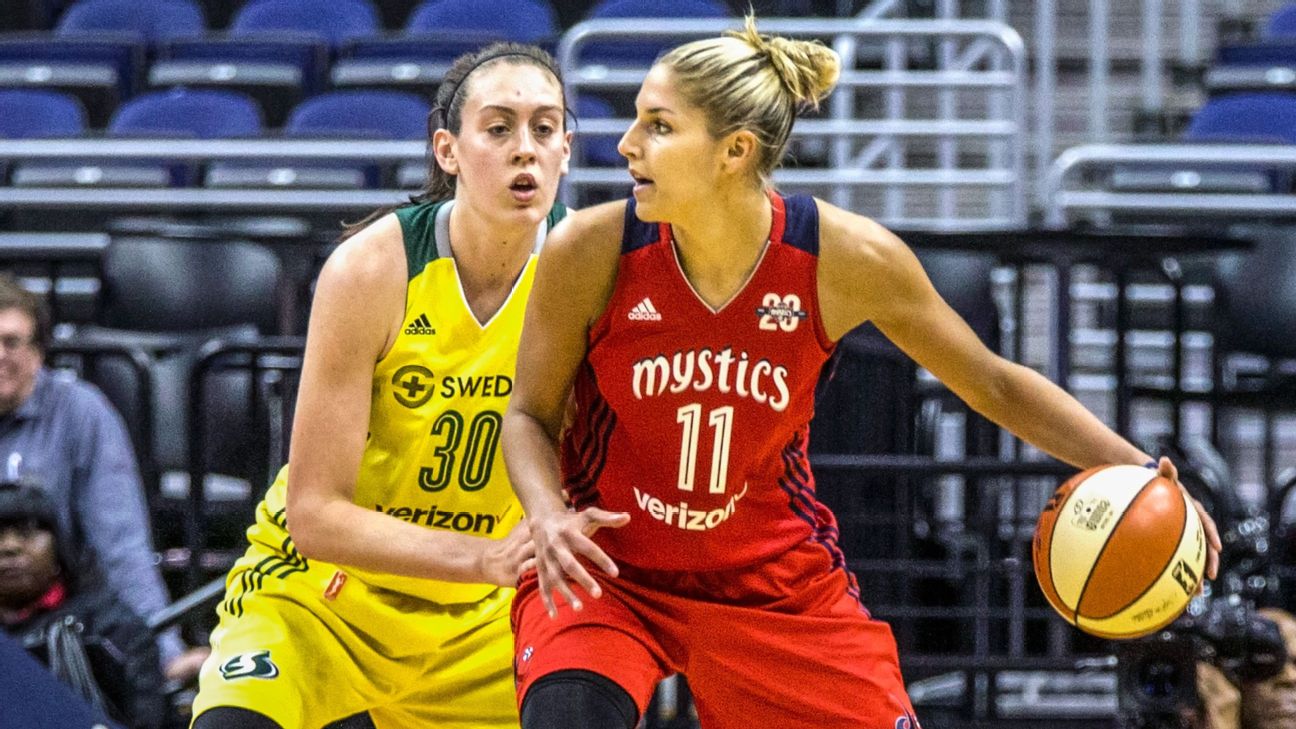 Might Sabrina Ionescu go from one of the top college teams in the country, the Pac-12 champion Oregon Ducks, to the last-place team in the WNBA? Right now, that's where her new team, the New York Liberty, projects in our first power rankings of what we hope will be the 2020 WNBA season.

The WNBA draft is over, and the Liberty added six picks, led by No. 1 Ionescu. While it seems unlikely all will make the roster, it still will be a young team trying to establish an identity under new coach Walt Hopkins. Maybe the Liberty will surprise us, but it could be a season of growing pains for Ionescu and her teammates.

How will the rest of the league shake out? Here's how the teams look on paper now.

There is concern about 2019 season MVP Elena Delle Donne's back, which required offseason surgery. And about whether 2019 Finals MVP Emma Meesseman, like other players from overseas, will return to the United States this year.

But the Mystics now also have a third star post player in 2012 MVP Tina Charles, who likely will be rejuvenated by a reunion with coach Mike Thibault and the chance to play for a team going for a repeat, as she has yet to win a WNBA title.

Point guard Kristi Toliver has gone back to Los Angeles, and Washington will miss her on the perimeter. But the Mystics got used to playing without her for stretches last season due to injury.

Natasha Cloud and Ariel Atkins form a strong backcourt, and at least one of the rookies drafted might make the team. It's hard to replicate chemistry from a previous championship season, but Washington has a good shot at doing that.

Two key players who missed the 2019 season are expected to return: forward Breanna Stewart, the 2018 MVP who had an Achilles tendon tear, and point guard Sue Bird, who was out after knee surgery. They are at different ends of their careers -- Stewart is 25 and Bird 39 -- but both brought so much to the 2018 championship season, and the two UConn products will continue to play well together. Other players from that title team, such as forwards Natasha Howard and Alysha Clark and guards Jewell Loyd and Jordan Canada -- who were the Storm's top four scorers in 2019 -- are back.

Center Mercedes Russell, now entering her third year like Canada, took a step forward last season. The Stewie and Bird injuries derailed what would have been a strong run at a repeat last year, and the Storm will be eager to recapture that championship feeling again.

The Sparks have talent, but the issue is whether they recover from last year's playoff meltdown and have a more cohesive unit under coach Derek Fisher in his second season. The issues of 2019 ultimately cost longtime general manager Penny Toler her job after a locker room outburst was revealed, and she has since filed a lawsuit that challenges her firing and alleges some franchise dirty laundry. Two veteran guards coming in might help calm down any lingering issues. Kristi Toliver returns after three seasons in Washington; she helped the Sparks win the 2016 title. And longtime Sparks nemesis Seimone Augustus -- in one of the shockers of the offseason -- came to Los Angeles after not coming to an agreement with Minnesota, where she has spent her career and won four titles.

They join the likes of post players Candace Parker and Nneka and Chiney Ogwumike, and point guard Chelsea Gray. Defensive stalwart Alana Beard has retired, but she was limited by injury last year. The Sparks could have a really deep and versatile team. But chemistry, which has been a sore spot for past Sparks teams, is something they'll have to improve on from 2019.

Multidimensional forward DeWanna Bonner going from Phoenix, where she spent her career, to Connecticut was one of the biggest moves of the offseason. Point guard Briann January also joins the Sun from the Mercury. Forwards Jonquel Jones and Alyssa Thomas and point guard Jasmine Thomas are key players back from the 2019 team that pushed Washington to Game 5 of the WNBA Finals. But two other starters from that team, Shekinna Stricklen and Courtney Williams, have moved on to Atlanta.

The Sun reveled in being underestimated last year, and they won't mind if there are doubters again, as that seems to fuel them.

After spending her WNBA career thus far with Atlanta, guard/forward Angel McCoughtry is now with Las Vegas. She missed last season while recovering from a knee injury, and she'll be eager to prove that at age 33 she can still be an impact player. But the Aces don't need her to be the same high-volume scorer she was with the Dream. Center Liz Cambage might not return this season from Australia -- she's currently not listed on the Aces' roster -- but A'ja Wilson continues to blossom into a star. And fellow forward Dearica Hamby took big strides to have her best season last year, highlighted by her steal and halfcourt shot that beat Chicago in the playoffs.

Figuring out how the pieces fit together for the Aces -- do they have reliable 3-point shooting to help with spacing? -- could be interesting, but coach Bill Laimbeer has been doing this a long time.

The Sky looked like they were headed to the semifinals -- until Hamby's big shot. It was a disappointing end to a pretty good season for the Sky, who have an older backcourt with Courtney Vandersloot and Allie Quigley but a growing star in wing Diamond DeShields, who led the team in scoring last year. From Dallas, the Sky got a rim protector in Azura Stevens, who was injured most of last season and is still trying to find her game. And they hope for continued development from forward Gabby Williams, Stevens' teammate at UConn.

The Sky added forward Ruthy Hebard, the No. 8 pick in the draft, who could provide a strong low-block presence on offense. Chicago's worry, though, is being a good but not good enough team -- able to make the playoffs but not be a championship contender.

Guard Diana Taurasi turns 38 in June, but it still feels most of the weight of the Mercury is on her. She was limited to six games last season because of injuries. During the USA Basketball college exhibitions, she said she was feeling better but didn't want to push things. A healthy Taurasi is still a weapon, both with how she plays and the confidence she gives her teammates on the court.

Center Brittney Griner is back after another good season. But the three players who followed her on the Mercury in scoring last season -- Bonner, Leilani Mitchell and January -- have gone elsewhere. However, there are some new faces, such as guards Skylar Diggins-Smith and Bria Hartley and posts Jessica Breland and Kia Vaughn, who bring experience. None of the rookies who made the team last year -- Sophie Cunningham, Brianna Turner and Alanna Smith -- made much of an impact, although injuries factored into some of that. We'll see if they can do more in their second season.

The Dream went from a hard-fought semifinal series loss to Washington in 2018 to last place in 2019. There's nowhere to go but up, and Atlanta made a lot of roster moves to try to do that. McCoughtry, the face of the franchise after being drafted No. 1 in 2009, is gone, but she didn't play last season while recovering from surgery. So the Dream already have gotten used to her not being on the court. Three of Atlanta's top four scorers from last season return: guards Tiffany Hayes and Renee Montgomery and post player Elizabeth Williams.

Williams and Stricklen from Connecticut and forward Glory Johnson from Dallas are among those veterans added to the mix. And in the draft, the Dream picked dynamic scoring guard Chennedy Carter at No. 4. This could all go OK, with the Dream establishing a new identity and grabbing a playoff spot -- or it could be chaotic, with a lot more players who want the ball than are willing to pass it.

Augustus, who was drafted No. 1 in 2006, is gone. Center Sylvia Fowles, who is 34, is the last remaining starter from the Lynx's most recent title team, in 2017. There is no certainty when or if forward Maya Moore will return to the WNBA from her criminal justice advocacy, but she won't be back this season. The Lynx are restocking with new blood, which is a necessity in every sport. That process could keep the Lynx out of the playoffs this season for the first time since 2010.

They got a great pickup last year in WNBA Rookie of the Year forward Napheesa Collier. They add two good draftees this year, No. 6 Mikiah Herbert Harrigan and No. 16 Crystal Dangerfield, at power forward and point guard. But Minnesota's leading scorer last season, guard Odyssey Sims (pregnancy), might not return this year. Two players who could be contributors -- wing Karima Christmas-Kelly and forward Jessica Shepard -- are coming off knee injuries that forced them to miss most of last season.

There is reason to believe the Fever are coming out of the woods after the difficulty of losing franchise icon Tamika Catchings to retirement in 2016. It has been a hard climb back, but Catchings is helping direct that now as general manager, and she has a new coach in veteran mentor Marianne Stanley, who has seen and done it all in the WNBA. That includes, finally, a championship as a Mystics assistant last season.

Last year, it hurt not to have wing Victoria Vivians (ACL) after she'd had a solid rookie season. Meanwhile, the Fever are waiting to see if guard Kelsey Mitchell, the No. 2 pick in 2018, can go from a pretty good scorer to an elite one. Forward Candice Dupree was the team's second-leading scorer behind Mitchell and is one of the league's most dependable veterans. But she'll be 36 later this year. Getting forward Lauren Cox in the draft gives the Fever a good young power forward to combine with last year's pick at the same No. 3 spot, center Teaira McCowan. The playoffs might be a stretch in 2020, but there should be growth.

The Wings are in reset mode, and they know there will be growing pains. But the draft -- with first-rounders Satou Sabally, Bella Alarie and Tyasha Harris -- was just what Dallas was looking for in terms of adding skilled players who can help change the general attitude with the Wings. Brian Agler, in his second season in Dallas, has won championships in Seattle and Los Angeles, and he wants to try to do the same with the Wings. That will take some time, but Dallas can take steps this year.

Katie Lou Samuelson, the No. 4 pick by Chicago last year, is getting a fresh start. She averaged just 7.6 minutes per game with the Sky and was traded. The Wings hope she can live up to her 3-point shooting potential and help space out their offense. She'll now join last year's No. 5 pick, Arike Ogunbowale, who was a strong candidate for Rookie of the Year but had to handle the ball too much for the Wings. She shouldn't have to play the point this year.

The Liberty had the busiest draft night, and after picking Ionescu first and wing Megan Walker ninth, they took less expected draft choices in two Louisville teammates: guard Jazmine Jones and forward Kylie Shook at Nos. 12 and 13. And they got another pick in a trade, No. 10 Jocelyn Willoughby.

It's definitely a new era for New York, led by Ionescu, and it should be interesting watching how it all comes together. But with this many young players -- however many that ends up being -- it's likely to be a pretty challenging season. 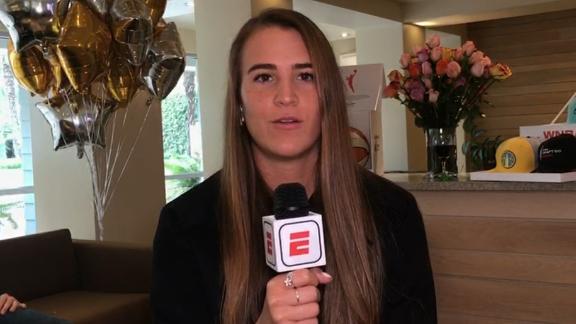