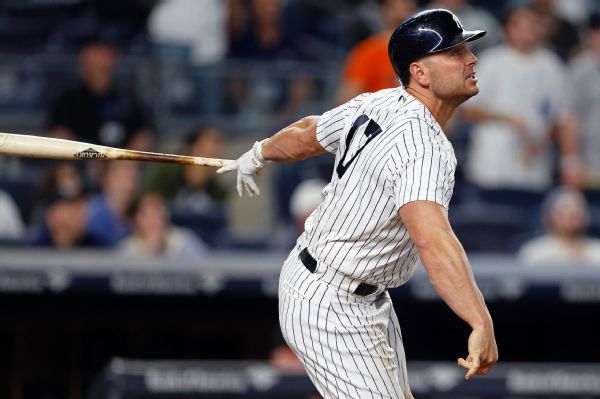 CHICAGO -- The New York Yankeesput designated hitterMatt Holliday on the 10-day disabled list Wednesday with a viral infection before a 12-3 win over theWhite Sox. In his place, they called up a top prospect, third basemanMiguel Andujar, who fueled the rout with three hits and four RBIs in his debut.

The Yankees have spent the past few days trying to figure out what is wrong with Holliday, who reported feeling like he had no energy.

"We have to survive this," Yankees manager Joe Girardi said.

Andujar, 22, has hit .312 between Double-A and Triple-A this season. He DHed and batted seventh against theWhite Soxon Wednesday in his first start and could see some time at third base.

The Yankees also announced Wednesday that veteran Chris Carter has accepted an assignment to Triple-A Scranton. Carter is still owed $3.5 million by the Yankees.

Carter could still come in handy, because first basemanTyler Austin's hamstring is acting up. Austin was not in Wednesday's lineup, and Girardi said he could be headed to the DL.