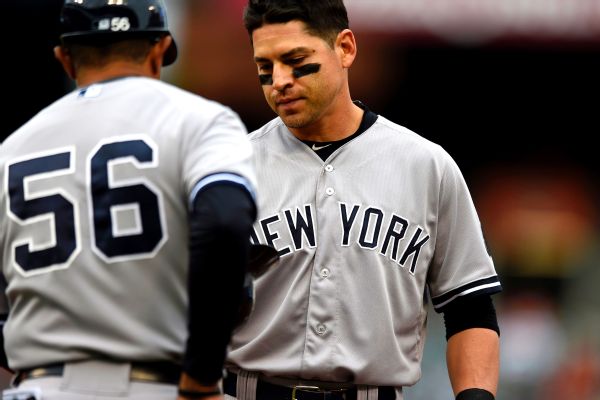 NEW YORK -- Jacoby Ellsbury took batting practice and ran the bases Wednesday, and the New York Yankees are hoping to "turn him loose" soon, according to general manager Brian Cashman.

Ellsbury has been out since May 24 with a concussion. The Yankees planned to see how the center fielder responded to hitting and running Wednesday before determining the next course of action, but the hope is he can resume baseball activities soon.

Ellsbury's first attempt to return from his concussion over two weeks ago was shut down when he began experiencing headaches again, so the Yankees are being cautious.

"First and foremost, we have to see how he responds in the next three to six days," Cashman said Wednesday before a game against the Los Angeles Angels.

The Yankees also announced that first baseman Greg Bird received a cortisone shot to treat a bruised right ankle. Bird's minor league rehab assignment was cut short after he went 3-for-21 with Triple-A Scranton/Wilkes-Barre from June 1 to 4. He hasn't played for the Yankees since May 1, and is batting .100 with just one homer in 19 major league games this season.

The Yankees had planned to keep Bird in Triple-A when his rehab assignment ended because of his struggles, but he felt discomfort near the end of the stint, prompting another visit to the doctor.

New York has struggled to fill in for Bird, a 24-year-old who hit 11 homers in 46 games as a rookie in 2015 before injuries derailed his path to an everyday job.

Chris Carter has gotten most of the playing time at first but is hitting .201 with eight homers and 66 strikeouts in 54 games. Carter took extra batting practice Wednesday and was out of the lineup, with Matt Holliday making his seventh start at first base this season. The Yanks want to limit Holliday's time at first, though, to keep him healthy.

The Yankees have discussed calling up Tyler Austin to play first but are sticking with Carter for now. Austin is batting .287 with a pair of homers and an .851 OPS with Scranton/Wilkes-Barre since returning from a broken left ankle.

What Cashman really wants, though, is to get Bird back and rolling in pinstripes.

"I know what Greg Bird is capable of when he's healthy and it's all in line," Cashman said. "I think when you're as gifted as a hitter as I believe he is, I don't think it takes too much for him to be rolling out of bed and hitting."
Report a correction or typo
Related topics:
sportsespnmlbnew york yankeesgreg birdmatt hollidayjacoby ellsburychris carter
Copyright © 2022 ESPN Internet Ventures. All rights reserved.
TOP STORIES
9 people shot, including 1 teen, in Newark drive-by shooting
2 boys, ages 11 and 13, stabbed in brawl outside NYCHA complex
Police arrest man wanted in Queens triple murder mystery
Woman, 86, recognized as longest-serving flight attendant
Woman killed while pushing stroller believed to be targeted: sources
14-year-old tiger dies after contracting COVID-19 at zoo
FCC asks Apple, Google to block TikTok from app stores
Show More
Plane crashes into CT river; 2 people, dog rescued
AccuWeather: Very hot and humid
Cruise ship hits iceberg in Alaska, returns to Seattle for repairs
Bus driver retires after 4-decades with Liberty Lines Transit
Vintage Burger King found behind wall inside Delaware mall
More TOP STORIES News