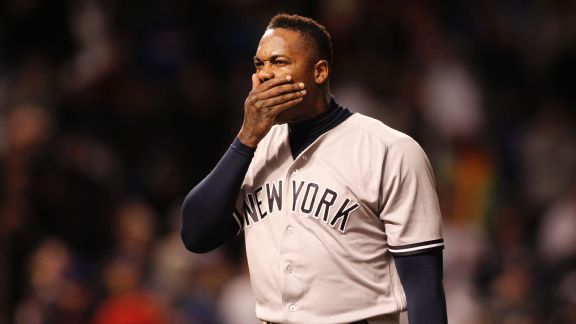 BOSTON -- Aroldis Chapman is out as the New York Yankees' closer.

Yankees manager Joe Girardi said before Saturday night's game against the Boston Red Sox that the hard-throwing lefty, who gave up two runs in a non-save appearance in Friday's 9-6 loss to Boston, is being taken out of that role to work through some location issues.

Both pitched in Saturday's game against the Red Sox, with Betances earning the save in New York's 4-3 win.

Chapman entered in the sixth inning on Sunday, pitching 1 innings with no runs, no hits, one walk and two strikeouts. Chapman struck outBrock Holt, the only batter he faced in the sixth, on a called third strike.

Girardi emphasized that this change could be short-lived -- depending on how Chapman responds to it -- and that he hopesmoving him around will help get things back on track.

"When we get him going like I believe he will get going, there's a good chance I'll put him back in that closer's role and manipulate the other three guys," Girardi said.

"He's been scuffling for the last 10 days, two weeks," Girardi said. "And I just thought for us to get him on track, maybe the best way would be to move him around a little bit until he gets going."

Chapman has given up at least two runs in each of his past three outings, including a 3-2 loss to Boston earlier this week.

Girardi said an injury has been ruled out as the culprit for Chapman's recent issues.

"We've looked at everything," Girardi said. "And I really think it comes down to his location. He's been up in the zone more."

Girardi said Chapman told him he was willing to do "whatever it takes" for the team to win.

"He knows that he needs to get back on track and that he's scuffled a little bit," Girardi said. "But he said, 'I'm willing to do anything. I just want to win.'"