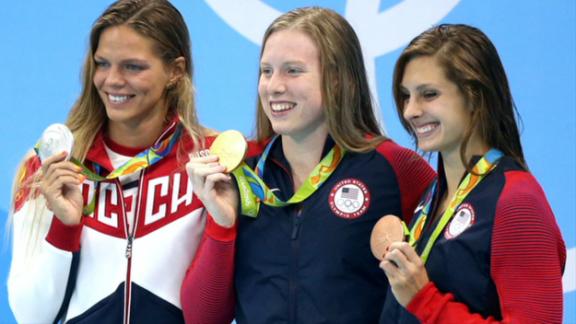 Russian swimmer Yulia Efimova defended her right to compete in the Rio de Janeiro Olympics on Thursday by pointing to the most decorated swimmer of all time, Michael Phelps.

Efimova mentioned Phelps when answering a question related to American Lilly King's declaration that anyone caught for doping should never be allowed to compete in the Olympics.

"Then what would she say about Michael Phelps?" Efimova said.

A Russian Swimming Federation spokeswoman told The Wall Street Journal that Efimova was referring to Phelps' three-month suspension by USA Swimming after he was photographed smoking from a marijuana pipe as well as his six-month ban following a 2014 DUI arrest.

Efimova made her comments at a news conference after winning the silver medal in the 200-meter breaststroke.

She was suspended 16 months after she tested positive for a banned anabolic steroid in 2013. She was also provisionally suspended this year after testing positive for meldonium, but that ban was lifted following a World Anti-Doping Agency recommendation.

"I am of course not for doping, and I have never done it on purpose," Efimova said. "But I know very many cases in which people do it out of not knowing or out of stupidity or out of naivete."

Efimova has maintained since her 2013 failed test that she did not know a supplement she was taking contained a banned substance.

King and Efimova engaged in a public finger-wagging war ahead of the 100-meter breaststroke final, in which the American won the gold medal, and King labeled Efimova a drug cheat. "I'm not a fan," King told NBC after the semifinals.

"There must always be another chance," Efimova said Thursday. "When you drive a car and break a rule, you just get a ticket. You don't lose your license for life or get put in jail."