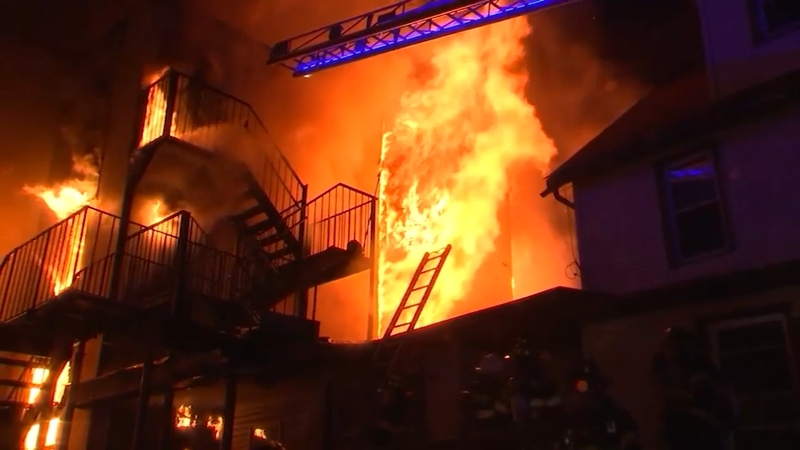 SPRING VALLEY, Rockland County (WABC) -- One person is dead and a firefighter missing after a massive blaze tore through an assisted living facility in Spring Valley, injuring several others and prompting dozens of middle-of-the-night rescues.

"We have numerous teams looking through the rubble," Rockland County Director of Fire and Emergency Services Chris Kear said.

The flames broke out inside the Evergreen Court For Adults on Lafayette Street just after 1 a.m. Tuesday. Between 20 and 25 residents were rescued by firefighters from what was described as a chaotic scene.

Ten were taken to area hospitals for treatment, and one was later pronounced dead.
EMBED More News Videos

Raw video from the scene shows firefighters responding after flames broke out inside the Evergreen Court For Adults on Lafayette Street.

A portion of the building collapsed as firefighters battled the blaze, ad the missing firefighter is believed to have been on the third floor, Kear said.

He rushed into the burning building to rescue residents, and officials believe he became disoriented and could not find his way out.

"The extent of the fire, the volume of fire, the conditions, were just too unbearable where firefighters went in it, and they just could not locate the firefighter, and they had to back out," Kear said.
EMBED More News Videos

Dan Krauth takes a look at the safety records for the Evergreen Court For Adults.

He was one of the first on the scene and transmitted a mayday, but other firefighters were unable to rescue him.

First responders are searching for him, using a mini excavator to clear the rubble.

"We have a general idea, where we feel that he is," Kear said. "However, it's painstaking. It's digging by hand till you can't dig by hand no more."

Two other firefighters were injured, one of whom appeared to have suffered a medical condition, possibly a heart attack. The other was treated and released.

All of the firefighters in Rockland County are volunteers. When they aren't risking their lives, they're postal workers, bakers, cops and small business owners.

Breaking news in Spring Valley, NY: A long-term care facility erupted in flames overnight. This is a massive, massive fire. We are working to learn the extent of the injuries. #abc7NY https://t.co/yQDitp7II5 pic.twitter.com/WBeZL4Osik

Many displaced residents were taken in buses to nearby facilities.

One resident was initially reported as missing, but all residents have since been accounted for.

"We believe they are, but again we are double-checking, we are triple checking, to make sure," Kear said.

It took more than six hours to get the fire under control, and firefighters spent the day battling "a ton of hot spots" and have been struggling with water supply problems.
EMBED More News Videos

Officials were trying to account for all the residents after a massive fire burned through an assisted living facility in Spring Valley.

The facility, which offers assisted living, nursing home facilities, and continuing care for older adults, is a total loss.

U.S. Rep. Mondaire Jones said he was horrified to learn of the fire in his hometown of Spring Valley.

"I am deeply saddened by the death of a resident of the Evergreen facility, and I am praying that the firefighter who bravely risked his life to save dozens of individuals trapped inside will be found safe and alive," the first-term Democrat said in a statement.

About 125 firefighters from many agencies worked to get the fire under control. Investigators worked to determine the cause of the fire.

Because of the extensive damage, "It's going to take quite a while to get to the root cause," Kear said.

Local leaders are calling on residents to donate clothing and toiletries to those affected by the fire.

In cooperation with my colleagues @Elijah4Senate and @kenzebrowski_ny and well as our local partners in government, please donate new clothing and toiletries to any of the locations listed on the photo for the residents impacted by the fire in Spring Valley. pic.twitter.com/nJT9qImndW