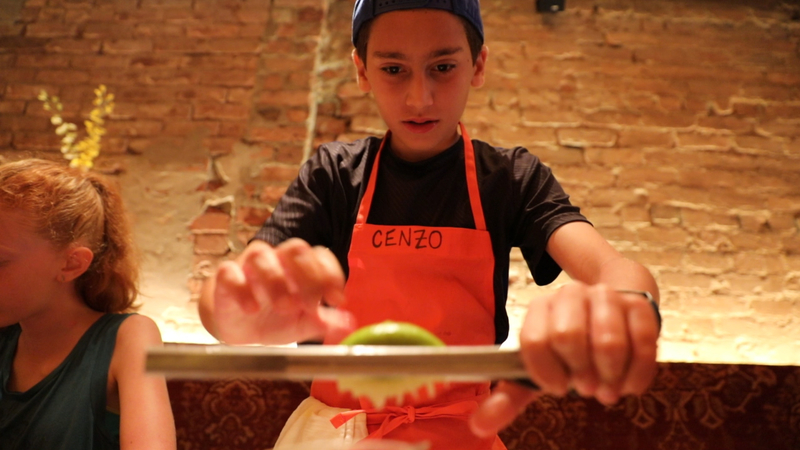 Children, some as young as seven, stand alongside expert chef and culinary director, Hart Lowry, as he guides them through the process of preparing the perfect sushi roll.

These youngsters and restaurant professionals were brought together by wholesome food advocate Kate Rogers as part of a week-long boot camp that will leave them with an insider's understanding of the kitchen and a belly full of tasty and healthy meals.

Nearly a decade ago, Rogers dreamed up the idea that is now known as Sprouts Cooking Club. Drawing from her love of healthy food and a desire to help young people in need, she formed the non-profit in the Bay Area of California. It has since expanded to New York City and even Paris.

At a Sprouts event at O Ya in Kips Bay, young chefs were honing their sushi making skills.

It's an all-day program that will likely take the group to another eatery later in the day where they'll learn and sample a new cuisine.

Some of the young chefs' families are paying tuition for the weeklong demonstrations, while others who cannot afford it are attending on scholarships.

The cuisine camps are one part of Sprouts: Another focuses on the giving mission of the club.

Tuition from paying students in the cooking club is used to fund an apprentice program that places young adults, typically from at-risk backgrounds, with restaurants and chefs for real-world training.

The goal is to have the young people prepared and ready for successful careers in the kitchen. The training is paid and lasts for six months before the candidate is offered guidance in applying and landing a job.

Sprouts Cooking Club for kids is wrapped up for the season but offers in-school camps during the academic year. More programs are available during school breaks.