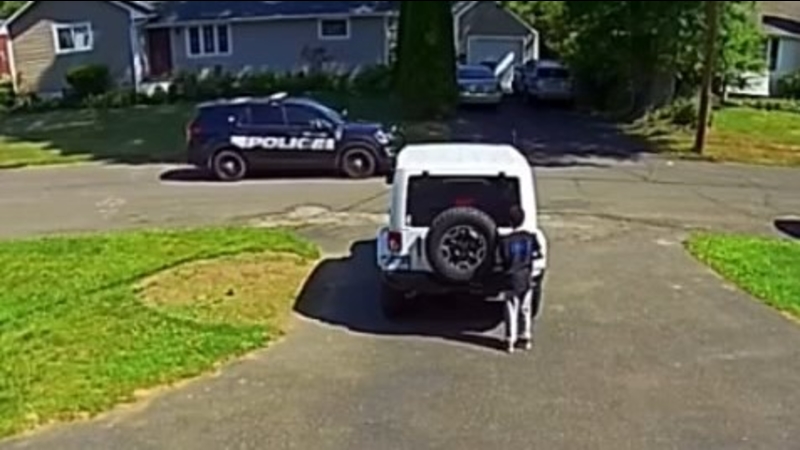 TRUMBULL, Connecticut (WABC) -- A 9-year-old boy who was playing basketball in his driveway in Connecticut when he hid from a passing police car has gone viral after his father shared video on social media.

Stacey Pierre-Louis posted the footage on Instagram, asking, "Why does he feel like he has to hide when he isn't doing anything wrong?"

His son Eliah was a kid simply being a kid on a warm summer day in Trumbull, but then the family's home security system caught a heartbreaking image -- the soon to be fifth grader reacting as a police car passes.

"When I got home, I asked him why he did what he did," Pierre-Louis said. "And then he goes on to tell me, 'Because they killed George Floyd.' That leveled me. What do you say to that?"

The camera shows Eliah briefly hiding behind an SUV, barley moving an inch, until the police car passes. It's only then that he goes back to playing ball.

Pierre-Louis was at work watching the system remotely and got a notification there was motion in the garage, but he never imaged he'd see this.

"You feel a range of emotion," he said. "Shock, even a sense of hopelessness, because I wasn't there to make him feel better."

The married father of two waited a few days before posting the video on social media, and millions have since viewed the clip -- including NBA star Lebron James, who said it broke his heart before writing a letter to the family.

"Ultimately, I'm grateful this happened because it sets up an environment where you can have some uncomfortable but very necessary conversations with not just our kid but everyone," Pierre-Louis said.

He says that since he posted the video, he's received overwhelmingly positive comments and feedback. Shortly after it happened, a police officer in their neighborhood stopped by to visit Eliah.

"We had a conversation," he said. "The goal was just to be honest, with discretion, because you want them to remain innocent still."

Pierre-Louis says he hopes the roughly 30 second piece of video ends up on the right side of change.