Stamford, Connecticut considers ban on texting while walking across street 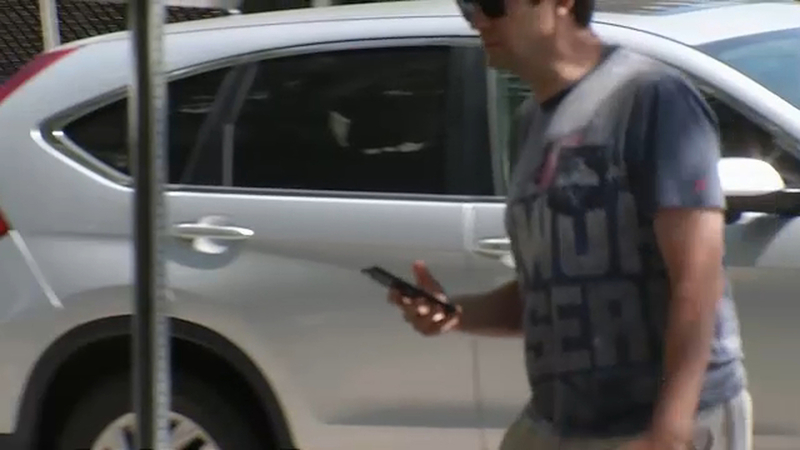 Stamford, Connecticut considers ban on texting while walking across street

STAMFORD, Connecticut (WABC) -- Most states have laws against texting and driving, but what about texting and walking?

You've definitely seen people do it, walking across a busy street with their eyes glued to their phone.

Now Stamford, Connecticut wants to become one of the first cities in the country to ban texting while crossing streets.

In this digital age, it's certainly a familiar sight: someone head down, transfixed by their smartphone, even when crossing the street.

"My whole objective in doing this is to prevent any more injuries of pedestrians getting injured or killed," said John Zalinsky, a member of the Stamford Board of Representatives.

It's exactly that kind of behavior the city of Stamford now wants to get rid of, perhaps becoming one of the first cities to make it illegal to do anything on your mobile device - talking, texting, or even listening to headphones - while crossing the street.

"I've spoken to Police Chief Fontneau about it. They have foot patrols on Thursday, Friday and Saturday evening and hopefully they will start giving out tickets if this does pass and I hope it does," said Zelinsky.

It's already illegal to text while driving in Connecticut, but this proposal goes a few steps further, including a $30 fine for offenders, all of this modeled after a similar ban in Honolulu, Hawaii.

"The purpose is not to raise money, but to make the public aware when they're crossing the street, that they can't assume that a car is going to stop, even though they have the red light," said Zelinsky.

Residents we spoke with Wednesday looked up long enough from their phones to throw support behind the plan.

"You see people walk, they fall in the gutter, walk right into a car, they don't even say excuse me, it's bad. I'm glad they're doing something about it," said one resident.

"I think it's a great idea, safety is very important and anything we can do to work n that direction I'm in favor of," said another resident.

The law still has to make its way through the city's political process, but the city leader who has proposed this says it already has strong support and could be city law by October.
Report a correction or typo
Related topics:
trafficstamfordtextingconnecticut newspedestrians
Copyright © 2022 WABC-TV. All Rights Reserved.
TOP STORIES
Police release photos of suspected gunman in Q train fatal shooting
Man charged in 'execution-style' murder under Major Deegan Expressway
Teen who drowned in NJ reservoir identified
Something strange is happening with our universe: NASA
15 arrested after NJ pop-up party that sparked 9 p.m. curfew
Taxi drivers rally for raises, per trip increase for customers in NYC
3 people killed in crash near catering hall on Long Island
Show More
AccuWeather: Sun and clouds, breezy and cooler
Weekend storms in NY down trees, leave more than 1,000 in the dark
Mayor declares state of emergency in NYC over baby formula shortage
Arkansas gov: Abortion ban should be revisited if Roe is overturned
Starbucks is leaving Russia for good
More TOP STORIES News