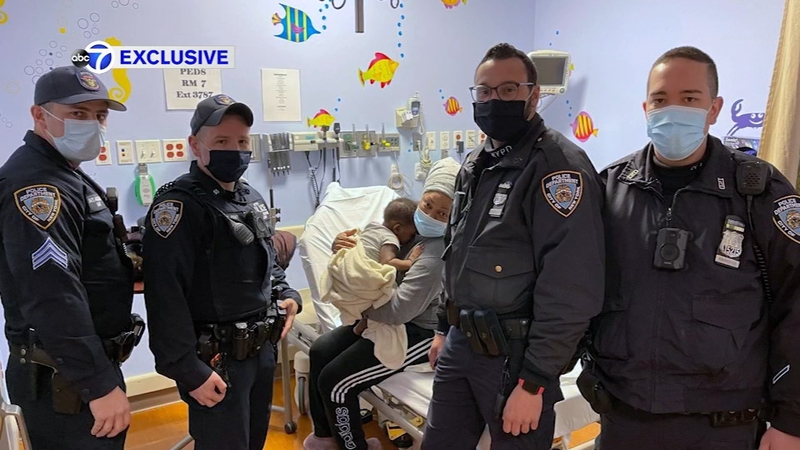 STATEN ISLAND, New York (WABC) -- A mother and father on Staten Island are showing gratitude to the New York cops who saved their baby girl when she stopped breathing.

Through a hallway and down four flights of stairs, Franklin Mansari was racing for help.

"And I start screaming I cannot help myself," the mother Agnes Daves said.

They wound up in their lobby, where Mansari started CPR, and his wife ran into the street.

That's where officers Michael Kirschhoffer and Greg Carosella, an EMT, were just pulling up.

"I start waving, they come right down," Daves said.

Officer Carosella says Daves started flagging them down to help her baby.

"Come inside -- see the baby on the counter over there with the father doing back compressions," Carosella said.

He took over CPR while his partner called for an ambulance.

But two more cops were around the corner -- Sergeant Rich Guerrieri and officer Daniel Del Pino, also an EMT.

"Nobody wants to be the cop that's called to an unconscious, unresponsive infant," officer Del Pino said. "I stepped between the father and the other officer and took the baby rolled her over in my arm. So her back was against my forearm and her head and neck were cradled in my hand."

Through his body worn camera, you can hear the urgency as Del Pino continued chest compressions and then ... the baby started breathing.

A Boca Raton woman received a single dose of the Moderna COVID-19 vaccine. Three weeks later, doctors say she gave birth to a healthy baby girl with antibodies against COVID.

"And with that, you could see the baby's eyes light up that she was coming back too," Del Pino said. "Honestly, in 11 years, this is probably the best day I've had on the job."

Less than an hour later, the four cops visited 7-month-old Annalise in the hospital, where doctors treated her for an infection.

By the end of the day, she was back home. Her parents were over the moon with gratitude, for the quick-thinking cops who saved her life.

"What you did for me today, it's only God that can do that so go send you guys," Daves said.

"Police are there to protect our lives and our property," Mansari said. "We trusted them, the life of this baby girl and by God's grace it was revived."