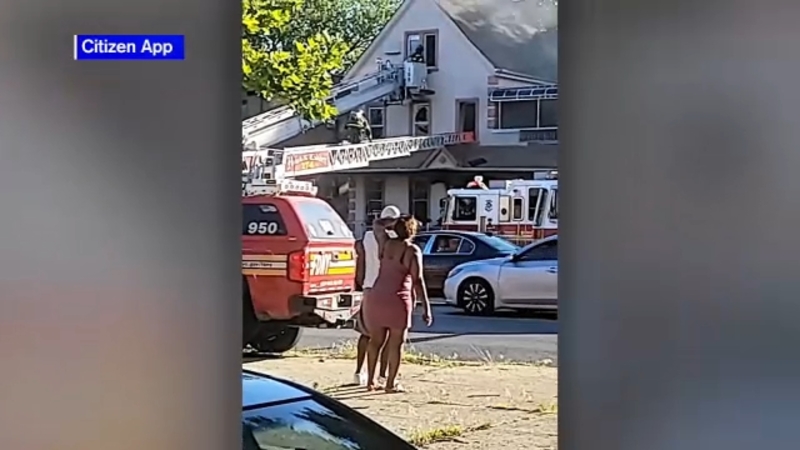 Firefighter Stefon Douglas lives on the same street on Kings Highway in the Flatlands section and arrived home around 6 p.m. to see black smoke coming from the two-story home.

Douglas, of Engine Company 276, sprang into action, ultimately carrying the child from the fire.

"The stove to the right of me was all on fire," he said. "I couldn't see anything except smoke."

Luckily, Douglas happened to have his department-issued breathing apparatus in his car. He takes part in career day at schools.

"Being lazy, I just had it in my truck," he said. "There's no way I would have performed the duties I did without that."

Help was on the way, but while standing at the back of the house, he realized he couldn't wait.

"I'm hearing a little bit of a whimpering going on to the left of me," he said. "I was telling, 'Please make more noise, make more noise,' but they weren't. It was getting more faint."

Wearing just shorts, a T-shirt, Crocs, and that breathing device, he went inside.

"I feel the little girl, grab her, pick her up and walk straight back out the same way I came," he said.

Other firefighters pulled the girl's mother from the house, but sadly, she passed away at the hospital Monday evening.

Responding firefighters continued to fight the blaze until it was properly contained and searched for any additional victims.

The child was critically injured and remains at Staten Island University Hospital North, but she is expected to survive.

Her 31-year-old mother has not yet been identified.

"There are definitely some times I sit back and think, why me, why was I picked for this?" Douglas said. "I really knew nothing about the job until I got here. I love it. It's the best decision of my life."