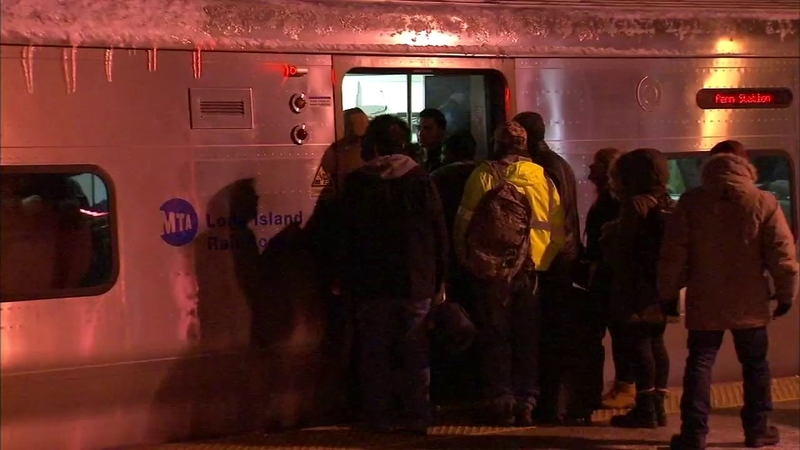 Babylon, Ronkonkoma and Huntington branches are running with express trains making local stops until they're filled.

Diesel train service is restored in diesel territory on the Oyster Bay and Port Jefferson branches between Greenport and Ronkonkoma and west of Speonk on the Montauk branch.

There is no service between Jamaica Station and Atlantic Terminal. Those tickets will be cross-honored by NYC Transit on the 2 and 3 trains between Brooklyn and Penn Station.
EMBED More News Videos

Workers were busy overnight trying to get the trains in place to restore at least partial service for the morning rush hour, but the MTA told Eyewitness News This Morning that refreezing on the rails delayed their efforts.

Crews also cleared the stranded trains. Before a train can carry commuters out of Huntington Station, they had to tow the stranded train ahead of it. Eyewitness News is told that more than a dozen trains became stranded during the storm, all of them, fortunately without passengers.

The impact of the storm was worse than first believed. Some trains were snowed in more than 24 hours after they stopped running. The railroads vast network of switches and third rail power needed to be tested and re-activated.