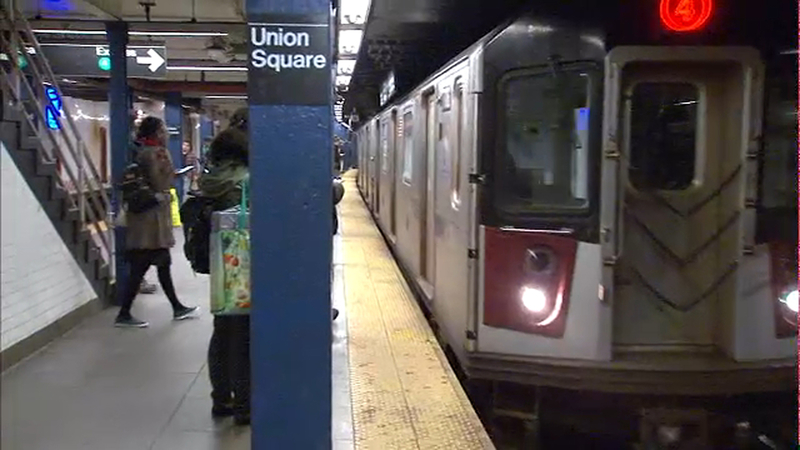 UNION SQUARE, Manhattan (WABC) -- Police are investigating a hate crime assault against a man at the Union Square subway station in Manhattan.

The victim says he was violently shoved onto the tracks by a man wearing a "Make America Great Again" hat.

"My brother is OK, thanks to God," said the victim's brother Andres Lopez through a translator, after police say the victim was targeted because of his race, punched repeatedly in the head and thrown onto the subway tracks.

"I know it was a hate crime," said Andres Lopez. "I don't know why he did it. He told my brother we came here to steal jobs from Americans."
EMBED More News Videos

It happened Friday night just after 10. Luis Lopez and his friend Alan were just trying to head home from their construction job when the insults flew on an uptown 4 train.

Investigators say the suspect started going in on the 24-year-old Mexican immigrant while they were riding the 4, making racial slurs.

When they got to the Union Square-14th Street station he pounced on him without warning.

"I'm nervous", Luis said Monday night through a translator. The pain is bad enough from the five stitches in his scalp. But it's the mental trauma, he says, that's left him terrified.

The attacker was spewing hate. "'****Mexicans, you are taking our jobs and you guys are bringing drugs and crime to this country,'" he said, according to the victim's friend Alan.

For all anyone knows, the man picked the gear he was wearing up off the street and has nothing more to do with President Trump than Luis Lopez does.

He explained how he and his friend decided to switch trains at 14th Street to get away from the man, but he followed them onto the platform.

"He grabbed me and started hitting me, attacking me," Luis said, sending him tumbling to the tracks. His friend pulled him back before the next train came.

The assailant ran off.

We asked Andres if his brother was hurt. "Yes, they threw him on the train tracks and thank God it wasn't much worse," said Lopez.

The suspect was wearing a signature hat from the 2016 election campaign.

"Since this president took office you know, I think there's been more racism," said Andres Lopez.

And despite the random hate-laced attack, Andres says he and his family fear nothing. "I'm not scared because really, we just came here to work, not rob anybody," he said.

The incident happened a week after police said a tourist was robbed at knifepoint at the Union Square subway station because of his "Make America Great Again" hat.