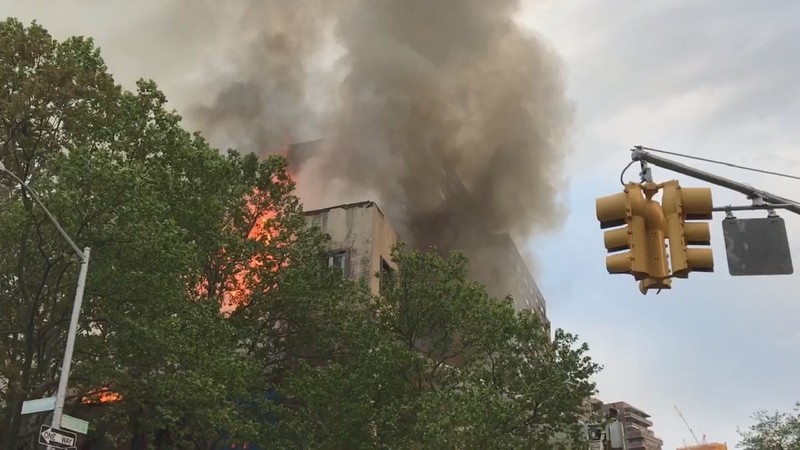 LOWER EAST SIDE, Manhattan (WABC) -- Investigators are trying to find out what sparked a massive fire at a historic synagogue on the Lower East Side.

Streets in the area remained blocked off Monday morning as firefighters continued to work on putting out hot spots.

Fire officials say flames broke out around 7 p.m. and were brought under control a little less than three hours later.

Flames shot from every window of the building, and the smoke could be seen for miles away.

Surveillance video recovered from a nearby camera showed three young people running from the general area. The, along with similar witness accounts, is being reviewed as authorities investigate.

Investigators are aware of previous reports of youths going in and out of the 167-year-old house of worship, which has been vacant for the past decade. No missing persons connected to the structure have been reported, but firefighters will carefully search the rubble to make sure there are no other victims inside.

The cause of the fire remains unclear, and it has not been labeled suspicious. To determine the cause, FDNY fire marshals will be joined by NYPD detectives and agents with the federal Bureau of Alcohol, Tobacco, Firearms and Explosives.

Although the fire occurred in what was once a house of worship, it is not being investigated as a bias crime.

The Gothic structure was originally built in 1850 as a Baptist church.

It later served as synagogue for the Beth Hamedrash Hagodol Orthodox Jewish congregation for over 120 years. The synagogue was closed in 2007.