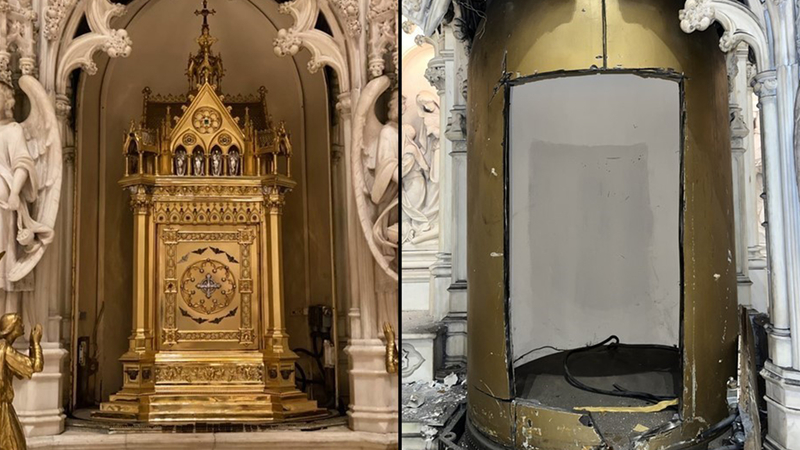 PARK SLOPE, Brooklyn (WABC) -- Parishioners and clergy at a Catholic Church in Park Slope are reeling from the brazen theft of the church's historic tabernacle, a centerpiece of the altar that holds the consecrated Communion hosts.

The tabernacle at St. Augustine Roman Catholic Church dates to the 1890s and is a sacred work of art that cannot be replaced, according to the Diocese of Brooklyn. In addition, sculptures of angels flanking the sacred receptacle were decapitated, and the Holy Eucharist was tossed all over the altar. Its estimated worth is $2 million.

The burglar was able to remove the tabernacle by cutting through a metal protective casing, the diocese said.

"This is devastating, as the Tabernacle is the central focus of our church outside of worship, holding the Body of Christ, the Eucharist, which is delivered to the sick and homebound," said Father Frank Tumino, pastor of St. Augustine. "To know that a burglar entered the most sacred space of our beautiful Church and took great pains to cut into a security system is a heinous act of disrespect."

The burglary and desecration is believed to have happened on Friday and was discovered the next day. A safe in the sacristy was also cut open, but nothing was inside.

"This is such a shock, such an act of evil," said parishioner Sharon Dawson.

When Father Tumino walked into the church, it still smelled like burnt metal.

"Within the shavings was the vessel that holds the Eucharist strewn all over," said Father Tumino.

Detectives believe the team of suspects did the damage sometime between Thursday evening and Saturday afternoon. It is not clear how they got in, but it appears they left through the front door.

"I was sad and completely upset. It's completely outrageous what they done," said parishioner David Flowers.

There are many security cameras both inside and outside the church, but officials say the suspects planned ahead and took the entire recording system.

"People who have direct access, they have to do that, I don't think a normal person would go inside and take that," Flowers added.

Marble angels surrounding the centerpiece were also damaged. Everyone is hoping that whoever took the tabernacle returns it with no questions asked.

Anyone who may have information that can help police with their investigation is asked to call the NYPD at 1-800-577-TIPS (8477).