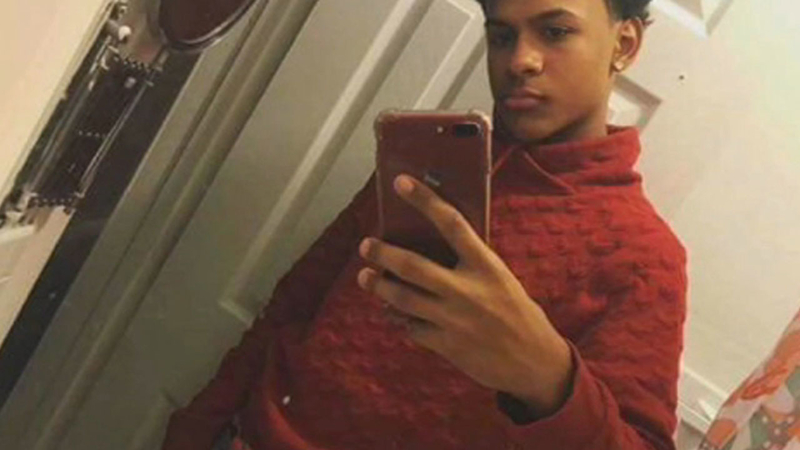 TREMONT, Bronx (WABC) -- The manhunt continues for the group of men who viciously murdered a teenager outside a bodega in the Bronx late Tuesday night, as outrage over the killing grows in the neighborhood.

Witnesses told police there had been a fight in front of a bodega at East 183rd and Bathgate Avenue in Tremont that resulted in Lesandro 'Junior' Guzman-Feliz, 15, getting slashed in the neck with a machete.

There is also outrage at workers in the bodega, because surveillance video of the attack shows that they did nothing to help him. The bodega has since shuttered because of the simmering anger.

"They broke my heart- they killed my son, and they killed me at the same time," said the victim's mother, Leandra Feliz.

Leandra says her son was an innocent boy, just starting to live life.

"I feel death right now. That's the only thing that can bring me back to life, real life, I want my son with me," she added.

Police say that six people were involved in the attack, and some of them fled in a white car.

Meanwhile, there are reports that a murderous gang has apologized for the savage killing, saying it was a case of mistaken identity. The family says to not believe rumors on social media, and that no one has directly reached out to them to apologize.

Graphic surveillance video shows the teen was slashed in the neck and all over his body.

The Feliz family is now calling for a boycott of the bodega after none of the workers helped the 15-year-old.

"I don't understand how they let the store owners or employees or whoever is there let him come back out like that, when he's cut in the main artery," said the victim's sister-in-law, Ione Feliz.

Lesandro's mother says the teen had wanted to become a police officer since he was five years old.

In the Bronx on 6/20, 15-yr-old Junior Guzman-Feliz was fatally stabbed by the men in the photo (on right). He was never going to give up on his dream of being an NYPD detective & WE’LL NEVER GIVE UP ON HIM. Help us get #JusticeForJunior You can anonymously call 800-577-TIPS. pic.twitter.com/0gVAMfmC7f

His death also caught the attention of Yankees pitcher CC Sabathia, who tweeted:

It hurts me every time I see a story like this in the news. I’m a father of four and couldn’t imagine losing any one of my own kids. The violence and hate needs to stop. There’s too much other stuff already going on in this world. #JusticeForJunior pic.twitter.com/OdMv9Vs1Uu

#justiceforjunior Junior was only 15 years old. Dragged out of a store , Beaten and stabbed to death my men twice his age. Not ONE person helped him after he ran to the hospital to try to get help for himself. Instead everyone just watched and recorded. Justice MUST be served !💔 pic.twitter.com/RHSSQGkIcY

Lesandro ran to St. Barnabas hospital just a block away, but police say he ended up collapsing on the sidewalk.

Funeral services for Lesandro will be held on Monday 6/25 and Tuesday 6/26 from 3-9 p.m. at the R.G. Ortiz Funeral Home on 524 Southern Boulevard in the Bronx.