Calif. man says screen on his new Tesla froze, causing vehicle to be stuck at 83 mph on freeway

The driver from Irvine said all of the buttons and switches - including turn signals and hazard lights - were not working.
WABC
By Rob McMillan 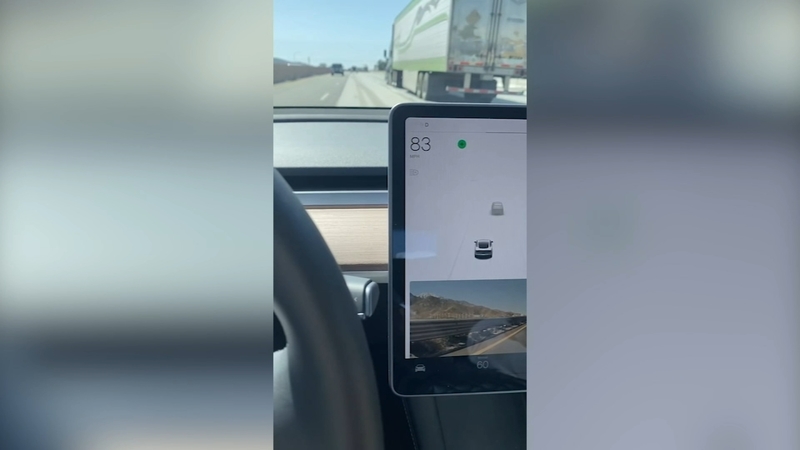 IRVINE, California -- The owner of a new Tesla Model 3 was left in shock after the car's main features allegedly froze while he was driving on the freeway.

Javier Rodriguez of Irvine, California told our sister station KABC-TV it happened last Thursday while he was heading westbound on the 10 Freeway.

Caught on camera! Are these Tesla drivers sleeping behind the wheel?

He said the car was stuck going 83 mph and the main screen was frozen.

Rodriguez said all of the buttons and switches - including turn signals and hazard lights - were not working.

"I noticed that it started to get hot in the car and there started to be a weird scent coming," recalled Rodriguez. "I was nervous that if I were to brake a whole lot that I wouldn't be able to gain the speed again to keep up with traffic and get around cars. I was nervous somebody was going to slam into me."

Dramatic video shows a driver trying to pull off a dangerously high-speed stunt in a Tesla but ends up crashing in an L.A. neighborhood.

Even though the accelerator wasn't responding, Rodriguez said the brakes did work. However, he said, that didn't make him any more comfortable when he was trying to stop.

Rodriguez was able to make it off the road, and a few minutes later, the car rebooted. That's when everything seemed normal.

An officer with the California Highway Patrol helped Rodriguez get off the freeway, where he eventually had the car towed.

He said Tesla later told him they fixed the vehicle, but all they would say about what happened was what he said they wrote in the report.

"Diagnosed and found poor communication from charge port door causing power conversion system to shut off in order to protect on board components during drive," Rodriguez recalled.

Now, Rodriguez is worried that some kind of safety feature on the car could cause the onboard computer to shut itself down with no warning.

KABC-TV has reached out to Tesla for a response.

An investigation by San Ramon Valley Fire narrowed the cause of a house fire down to either the 2013 Tesla battery or the vehicle's electrical system.

"I need more explanation," said Rodriguez. "I'm on the freeway and this happens at 83 miles an hour. Everybody is trying to say, 'Well we fixed it. We fixed it,' but I need an explanation."

If you're on the ABC7 News app, click here to watch live