Students return to newly renovated Harlem School of the Arts 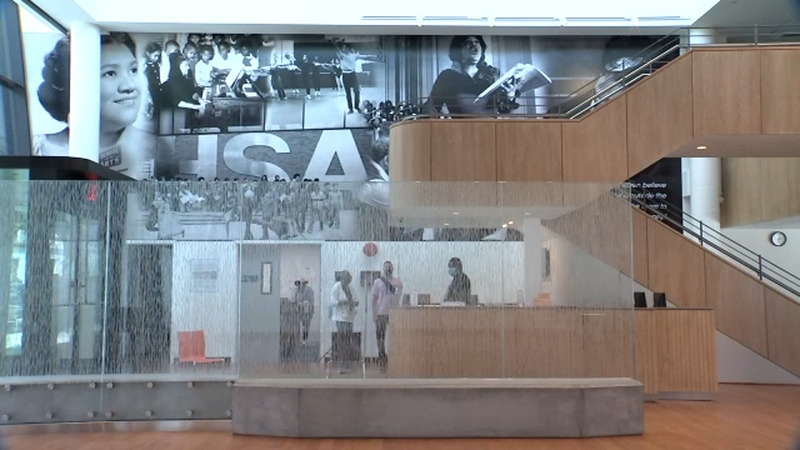 Students return to newly renovated Harlem School of the Arts

HARLEM, Manhattan (WABC) -- Like so many other arts organizations, the Harlem School of the Arts (HSA) had to go virtual during the pandemic, coaching their students in dance and music online through a program called HSA@Home.

Meanwhile, a major renovation at the non-profit's Harlem campus proceeded on schedule.

Now, students are back at HSA, and the change along St. Nicholas Ave. is dramatic. A new faade only hints at what's new inside because one big donation has allowed HSA to pursue its mission with new energy.

We found 12-year-old Walter Russell III tap dancing at the base of an 1800 square foot wall of windows facing the street.

"It feels like honestly a dream come true," he said. "I never thought I would be here just tap dancing and doing what I love best."

The Purple List takes its name from one of NYU's school colors, and the effort has helped bring much needed diversity to the film industry.

The spring in his step marks a summer of renewal at HSA, thanks to a building that's been renovated so thoroughly, it might as well be new.

"The acoustics are amazing," HSA President Eric Pryor said. "The aesthetics of the space are amazing."

He pointed out a mural featuring Dorothy Maynor, who founded the school. Her legacy has been ensured by a gift of $9.5 million from the Herb Alpert Foundation.

For adults of a certain age, the sounds of Herb Alpert and the Tijuana Brass are part of their childhood. They topped the charts alongside The Beatles, and Alpert mined much more gold as the "A" in A&M Records.

The company he started with Jerry Moss was sold for more than half a billion dollars.

Today, he spends much of his time giving back.

"Way beyond my dreams what happened to me, and I always wanted to pass it on," he told us in 2019. "I think kids should have that opportunity, and it should not be a privilege, but it should be a right."

We spoke as he showed me the progress of the renovations alongside his wife, jazz singer Lani Hall.

Pryor said Alpert wanted a state of the art facility that was "pitch-perfect," and he pointed to the new floor and other elements.

"The baffles in the ceiling, the whole sound system, of course," he said. "This 1,800-square-foot glass curtain wall that's on a 5 degree angle for sound."

Even the outdoor space has been renovated.

"There's been a lot of time and energy put into making the facility more like home, so it's been a great thing to see especially after the pandemic," Nuwere said.

"It was breathtaking to see the space, to know that these young people and artists and creatives have a space to share their art," Simmons said.

Maynor, who founded HSA, imagined a place where young people could "make beauty" in their own community, and this is now possible like never before.

The hope is the world-class facility will attract the world's most talented artists to mentor the hundreds of young people for whom HSA is a beacon.