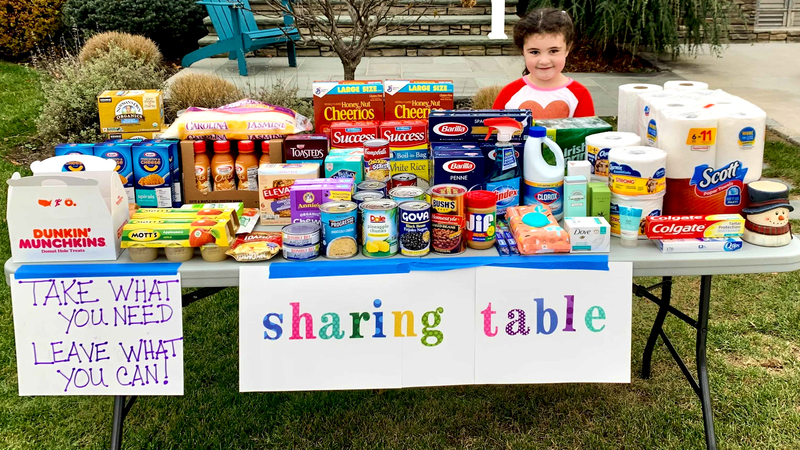 SEAFORD, New York -- Throughout the coronavirus pandemic, communities have been getting creative when it comes to giving back to those in need.

It was a Sunday morning in November when Mary Kate Tischler of Seaford and her 6-year-old daughter decided to create their own "Sharing Table".

She drew inspiration from the a woman giving back to her neighborhood in Detroit, Michigan, which inspired her to do her own version.

Tischler collected non-perishables from her house and bought some other supplies at the grocery store. She then created a homemade sign, so that people driving by could stop and take what they need - for free!

"The first-day people were coming and taking things, dropping things off it was starting to work immediately," said Tischler. "As soon as people started hearing about us, I started getting phone call after phone call for other people wanting to start sharing tables, and it has just been an amazing evolution."

Initially, Tischler thought that this was only going to be a one-day thing, now more than two months later, she oversees 33 tables!

The tables are spread throughout Long Island, and there's even one on the West Coast in California. She then changed the name of her organization to 'The Sharing Tables of NY & CA'.

Tischler emphasizes this point due to many people wanting to show her proof or a form of identification before they take something from the table, which is completely unnecessary.

Every sign that Tischler displays on their tables reads "Take what you need and leave what you can if you can!"

Related: The Butterfly Effect Project is on a mission to pave a path of success for youth girls

Communities across the nation are struggling with food insecurity, and Tischler wanted to create a safe space where people can get the aid they need without feeling insecure about themselves.

"If each of those tables is helping even three people a day and they've been open for ex-number of weeks it just starts multiplying," said Tischler. "You realize how many people are benefiting from this and it's just a really good feeling. I love how so many people have stepped up to do the same thing, it's just really heartwarming."