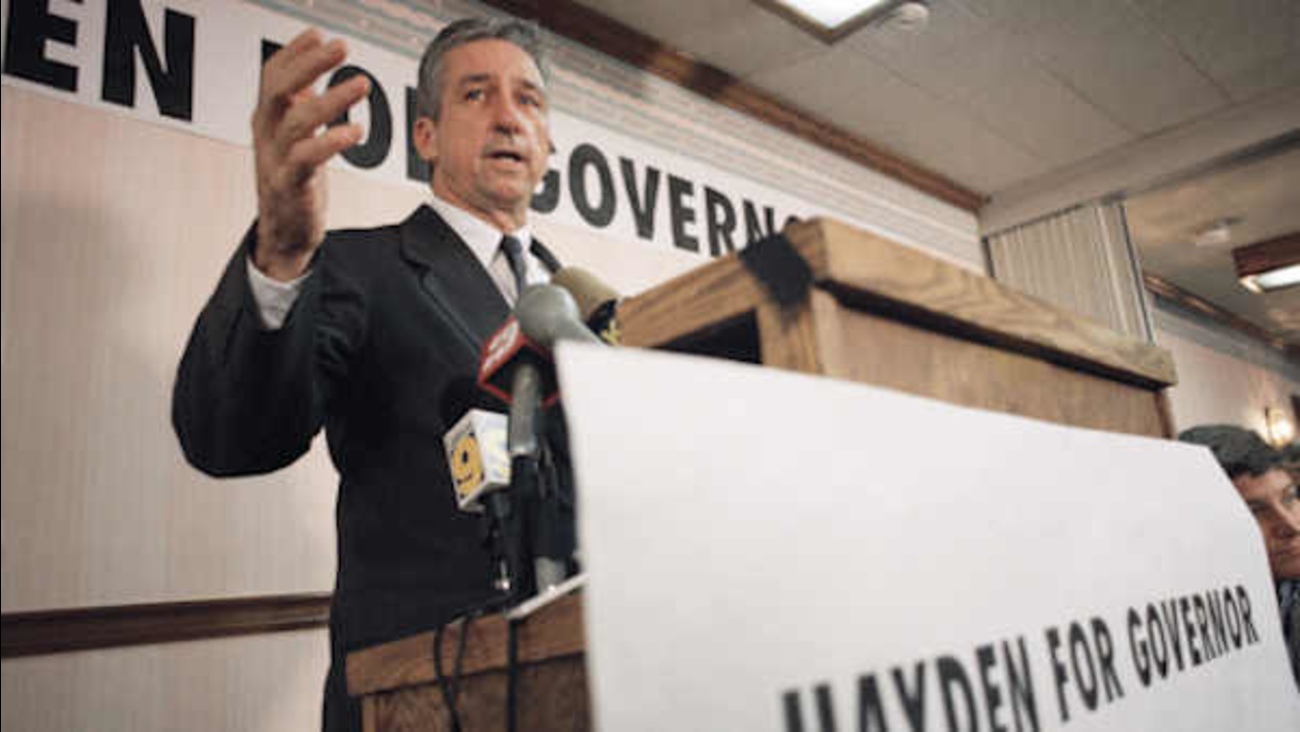 He died on Sunday after a long illness, said his wife, Barbara Williams.

Hayden, once denounced as a traitor by his detractors, overcame his past and won election to the California Assembly and Senate where he served for almost two decades as a progressive force on such issues as the environment and education. He was the only one of the radical Chicago 7 defendants to win such distinction in the mainstream political world.

He remained an enduring voice against war and spent his later years as a prolific writer and lecturer advocating for reform of America's political institutions.

Los Angeles Mayor Eric Garcetti praised Hayden. "A political giant and dear friend has passed. Tom Hayden fought harder for what he believed than just about anyone I have known. RIP, Tom," Garcetti said Sunday night on his Twitter account.

Hayden wrote or edited 19 books, including "Reunion," a memoir of his path to protest and a rumination on the political upheavals of the '60s.

"Rarely, if ever, in American history has a generation begun with higher ideals and experienced greater trauma than those who lived fully the short time from 1960 to 1968," he wrote.

Hayden was there at the start. In 1960, while a student at the University of Michigan at Ann Arbor, he was involved in the formation of Students for a Democratic Society (SDS), then dedicated to desegregating the South. By 1962, when he began drafting the landmark Port Huron Statement, SDS and Hayden were dedicated to changing the world.

"We are people of this generation, bred in at least modest comfort, housed now in universities, looking uncomfortably at the world we inherit," began the statement which outlined a plan for a revolutionary campus social movement.

Hayden was fond of comparing the student movement that followed to the American Revolution and the Civil War.

In 1968, he helped organize anti-war demonstrations during the Democratic National Convention in Chicago that turned violent and resulted in the notorious Chicago 7 trial. It began as the Chicago 8 trial, but one defendant, Bobby Seale, was denied the lawyer of his choice, was bound and gagged by the judge and ultimately received a separate trial.

After a circus-like trial, Hayden and three others were convicted of crossing state lines to incite riot. The convictions were later overturned, and an official report deemed the violence "a police riot."

The trial became the subject of books, a play and Hayden's own reflections in "Voices of the Chicago 8: a Generation on Trial."

Thomas Emmet Hayden was born Dec. 11, 1939, in Royal Oak, Michigan, to middle-class parents. At Michigan, he took up political causes including the civil rights movement. He wrote fiery editorials for the campus newspaper and contemplated a career in journalism. But upon graduation, he turned down a newspaper job. As he wrote in his memoir, "I didn't want to report on the world; I wanted to change it."

He joined the fledgling Student Non-Violent Coordinating Committee (SNCC), went freedom-riding during civil rights protests in the South and was beaten and briefly jailed in Mississippi and Georgia. He married a fellow activist, Sandra "Casey" Cason, and together they witnessed the violence of the battle against segregation.

Yearning for a more influential role, Hayden returned to Ann Arbor, where he was enlisted by the SDS to draft the Port Huron Statement, a call to action he hoped would spread to the rest of the country.

"I didn't want to go from beating to beating, jail to jail," he wrote. "... There was an entire generation to arouse, primarily about civil rights but also about the larger issues."

In 1965, Hayden made his first visit to North Vietnam with an unauthorized delegation. He found out later that his movements were being tracked and recorded by the FBI, as they would be from then on.

In 1967, he returned to Hanoi with another group and was asked by North Vietnamese leaders to bring three prisoners of war back to the United States. With the prisoners suffering medical problems, the U.S. State Department thanked Hayden for his humanitarian action.

Firmly committed to the anti-war movement, Hayden participated in sit-ins at Columbia University, then began traveling the country to promote a rally in Chicago for the 1968 Democratic National Convention.

In the interim, a single event galvanized him - the 1968 assassination of his friend, Sen. Robert F. Kennedy, in Los Angeles.

"I went from Robert Kennedy's coffin into a very bleak and bitter political view," Hayden told the Associated Press in 1988. "I think it confirmed for me that there was no future and brought out a lurking belief that this was a really violent country and that I was headed into apocalyptic times."

Police assaults on student demonstrators in Chicago seemed to confirm his belief. But he later said he was wrong.

"The radical pressure caused the reforms," Hayden said. "But it's fair to say the system reformed itself."

In 1971, Hayden met Jane Fonda, a latecomer to the protest movement.

"She came from the orbits of fame, power and success. A popular actress and the daughter of Henry Fonda, she burst like a dislocated star onto the movement scene ... but came only slowly and haltingly into my life," he wrote.

After he heard her give an eloquent anti-war speech in 1972, Hayden said they connected and became a couple. He was divorced from Cason and had been through other romances. Fonda was divorced from director Roger Vadim and had a daughter, Vanessa Vadim.

"I was 32, she 34, both of us were starting over," he wrote. "The passion of our common involvement no doubt caused our involvement in passion for each other."

He acknowledged ruefully that their marriage in 1973 may have appeared to some as "a remake of 'Beauty and the Beast.' "

He was a rumpled longhaired activist who still cast himself as an outsider. She was a glamorous, world-famous movie star and heiress to a Hollywood dynasty. They were married for 17 years and had a son, Troy.

Both Hayden and Fonda were demonized by the political right after she visited North Vietnam in 1972 and was photographed on a North Vietnamese anti-aircraft gun. It took many decades to minimize her "Hanoi Jane" moniker.

With heavy financial support from Fonda, Hayden plunged into California politics in the late 1970s. He formed the Campaign for Economic Democracy and was elected to the Assembly in 1982.

In 1992, Hayden won election to the state Senate advocating for environmental and educational issues. However, his radical past disturbed conservatives and interfered with his legislative initiatives.

By then, he and Fonda were divorced, their relationship having withered as she returned to acting and built an exercise empire.

In 1994, Hayden was defeated in a run for the state governorship, and he lost a bid to become mayor of Los Angeles.

After leaving public office, Hayden wrote and traveled extensively, lecturing, teaching and speaking out against the wars in Iraq and Afghanistan. He was also an advocate for animals, and in 2012 he lobbied Gov. Jerry Brown to preserve a piece of legislation known as Hayden's Law, which he had authored to protect shelter animals from premature euthanasia.

Hayden acknowledged at the end of his memoir that his time as a counterculture rebel had been the most exciting and fulfilling of his life.