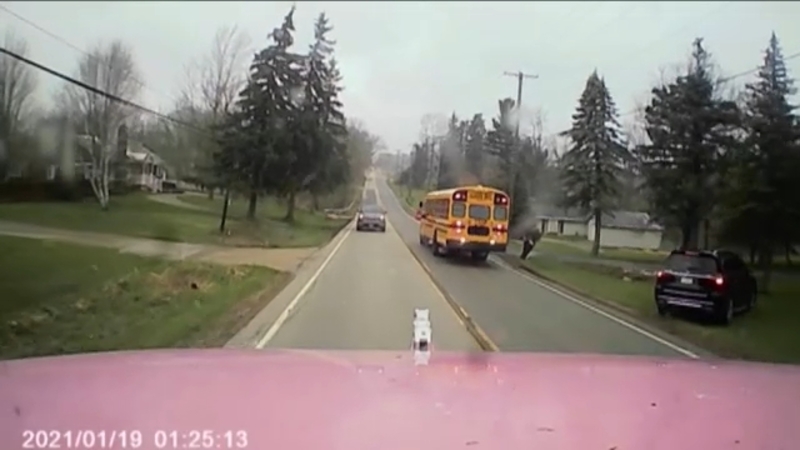 CLEVELAND, Ohio -- Dashcam video shows the terrifying moments when a truck driver near Cleveland, Ohio, lost control of his tractor-trailer and nearly crashed into a school bus loaded with students.

The incident unfolded Tuesday around 8:25 a.m. as a school bus was finishing its morning rounds on its way to Ralph E. Waite Elementary School in Medina, Ohio, about 30 miles southwest of Cleveland, according to Montville police chief Matthew Neil.

The bus had pulled over on the northbound lane of state route 57 to pick up children when the driver was alarmed by the truck's horn, Neil said.

Another employee, who was also on the bus, can be heard asking the driver whether the truck was going to be able to pass through safely.

The truck driver realized his brakes were not working and began downshifting the vehicle to prevent it from crashing into the bus, Neil told CNN.

In the videos released by the Montville Police Department, the truck's dashcam was also rolling and captured the terrified driver's reaction as he approached the school bus. The driver let out several screams as he weaved between the school bus and a pick-up truck that was stopped in the lane running in the opposite direction.

"I'm just kind of sitting here. Next thing I know, I hear a horn blaring, and I look up, and I realize there was a tractor-trailer heading down my way, head-on," the driver of the pick-up truck, Josh Click, told CNN affiliate WEWS. "I had to do what I had to do to protect myself and the kids. It was one of those moments where you realize things can happen in an instant."

The truck driver eventually got the truck to stop about a quarter of a mile down the road and called his employer to notify them of what happened, Neil said.

"I think the driver of the semi-truck dealt with this failure in the most professional manner possible," Neil said. "We couldn't have asked for a better response when it comes to avoiding what could've been a catastrophic accident. We don't have enough ambulances in this county to supply the needs of the patients if he would've hit that bus and had injuries. I'm just so thankful that his professional actions helped avoid a crisis."

It's still unknown why the truck was unable to stop, and the vehicle is currently being inspected by Ohio State Motor Carrier Enforcement.