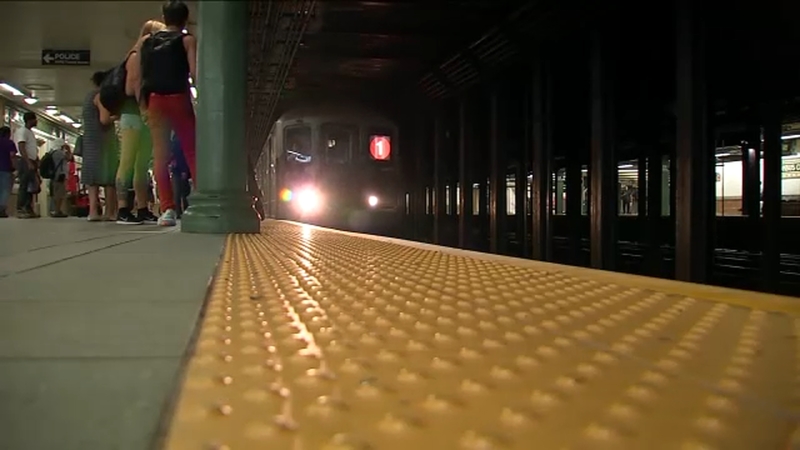 NEW YORK CITY (WABC) -- A transit officer was attacked in a Brooklyn subway station after telling a man to stop smoking on the subway platform.

It happened around 6:48 p.m. on the 3 train platform at the Pennsylvania Avenue subway station in East New York.

The officer first warned the 24-year-old man to put out the cigarette, but he apparently ignored the warning.

Then, the suspect threw himself down the stairs and police say he tried to drag the officer down the steps as well.

At the base of the stairs, a struggle ensued with the man allegedly trying to grab the officer's gun several times.

Alex Eremin was placed under arrest and taken to Brookdale University Medical Center for a medical evaluation.

The officer was transported to New York-Presbyterian Brooklyn Methodist Hospital in stable condition.

Police say the transit officer was on solo patrol at the time.

After the attack Tuesday evening, the police union president and the mayor agreed to modify train patrols.

Now, two officers will walk through train cars in separate directions but stay within eyesight of each other.

In addition, the city and MTA are launching a campaign to teach riders how to be safe passengers.

"We are going to move with the MTA to put in place a massive campaign on how to be a safe passenger," Adams said. "While I was out I saw women passengers in isolated areas standing alone. That is just unsafe. So we must play a role of educating passengers how to be partners in safety."

One of those safety tips includes riding in the conductor's car when it's late at night.

Nine people were shot, one of them fatally, when gunfire erupted in Harlem overnight. The victim who died was a college basketball star. Sonia Rincon has more on the story and reaction from family.