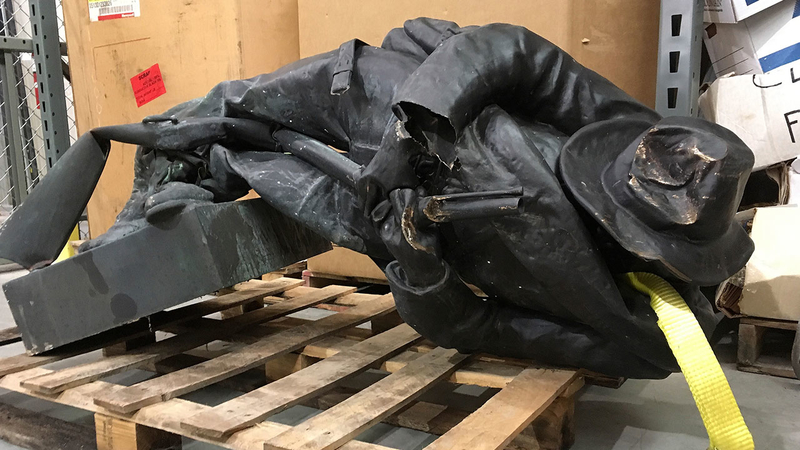 WASHINGTON -- President Donald Trump bitingly decried the rising movement to pull down monuments to Confederate icons Thursday, declaring the nation is seeing "the history and culture of our great country being ripped apart."

Trump's remarks came as the White house tried to manage his increasing isolation and the continued fallout from his combative previous comments on last weekend's racially charged violence in Charlottesville, Virginia.

Here's his series of posts:

Sad to see the history and culture of our great country being ripped apart with the removal of our beautiful statues and monuments. You.....

...can't change history, but you can learn from it. Robert E Lee, Stonewall Jackson - who's next, Washington, Jefferson? So foolish! Also...

...the beauty that is being taken out of our cities, towns and parks will be greatly missed and never able to be comparably replaced!

He also tore into fellow Republicans who have criticized his statements on race and politics, fanning the controversy toward a full-fledged national conflagration.

As Day Six of the White House reaction to Charlottesville wore on, some Republicans were sharpening their criticism of Trump.

The president "has not yet been able to demonstrate the stability, nor some of the competence, that he needs to demonstrate in order to be successful," Sen. Bob Corker said after an event in his home state.

The Tennessee Republican, typically an ally of the White House, warned: "Our nation is going to go through great peril" if Trump cannot show that he understands "what has made this nation great."

Pressured by advisers, the president had taken a step back from the dispute on Monday, two days after he had enraged many by declining to single out the white supremacists and neo-Nazis whose demonstration against the removal of a Robert E. Lee statute had led to violence and the death of a counter-protester in Charlottesville.

Yet he returned to his combative stance on Tuesday - insisting anew that "both sides" were to blame. And then in a burst of tweets on Thursday he renewed his criticism of efforts to remove memorials and tributes to the Civil War Confederacy.

"You can't change history, but you can learn from it," he tweeted. "Robert E. Lee. Stonewall Jackson - who's next, Washington, Jefferson? So foolish. ...

"Also the beauty that is being taken out of our cities, towns and parks will be greatly missed and never able to be comparably replaced!"

He wasn't talking about beauty in earlier tweets, lashing at GOP Sens. Lindsey Graham of South Carolina and Jeff Flake of Arizona.

He accused "publicity-seeking" Graham of falsely stating his position on the demonstrators, called Flake "toxic" and praised a Flake primary election opponent.

Graham said Wednesday that Trump "took a step backward by again suggesting there is moral equivalency" between the marching white supremacists and the people who had been demonstrating against them. And Flake has been increasingly critical of Trump in recent weeks.

Another Republican senator who has sometimes been critical of Trump, Susan Collins of Maine, said Thursday, "The president should've spoken out far more strongly from the very beginning."

Later, Thursday, Sen. Dan Sullivan, an Alaska Republican, directed a comment to Trump on Twitter: "Anything less than complete & unambiguous condemnation of white supremacists, neo-Nazis, and the KKK by the POTUS is unacceptable. Period."

Other Republicans, including the most powerful in Congress, have been making strong statements on Charlottesville and racism, but few have been mentioning Trump himself.

The Senate's top Republican, Majority Leader Mitch McConnell, condemned "hate and bigotry." House Speaker Paul Ryan charged that, "White supremacy is repulsive." But neither criticized the president's insistence that there were "very fine people on both sides" of the violent weekend clash in Virginia.

The nuanced statements reflect the party establishment's delicate dance. Few top Republican officeholders want to defend the president in the midst of an escalating political crisis, yet they are unwilling to declare all-out opposition to him and risk alienating his loyalists.

In another major sign of discontent within the Republican Party, Trump abruptly abolished two of his White House business councils Wednesday as corporate chiefs began resigning in protest of his racial statements.

"Rather than putting pressure on the businesspeople of the Manufacturing Council & Strategy & Policy Forum, I am ending both. Thank you all!" Trump tweeted from New York. His action came after one of the panels had already agreed to disband earlier in the day.

The White House is trying to deal with the repercussions from Trump's defiant remarks on the Virginia tragedy. Advisers hunkered down, offering no public defense while privately expressing frustration with his comments.

The White House says it is working to find a "convenient" time for Trump to speak with the family of the 32-year-old woman who was killed nearly a week ago while protesting the white nationalist rally.

Trump, staying at his golf club in New Jersey, was increasing rather than slowing his tweet-a-thon.

On Wednesday, he had told associates he was pleased with how his combative press conference had gone a day earlier, saying he believed he had effectively stood up to the media, according to three people familiar with the conversations who demanded anonymity because they were not authorized to speak publicly about them.

Denise Morrison, chief executive of Campbell Soup, declared she was leaving Trump's manufacturing council, saying, "The president should have been - and still needs to be - unambiguous" in denouncing white supremacists.