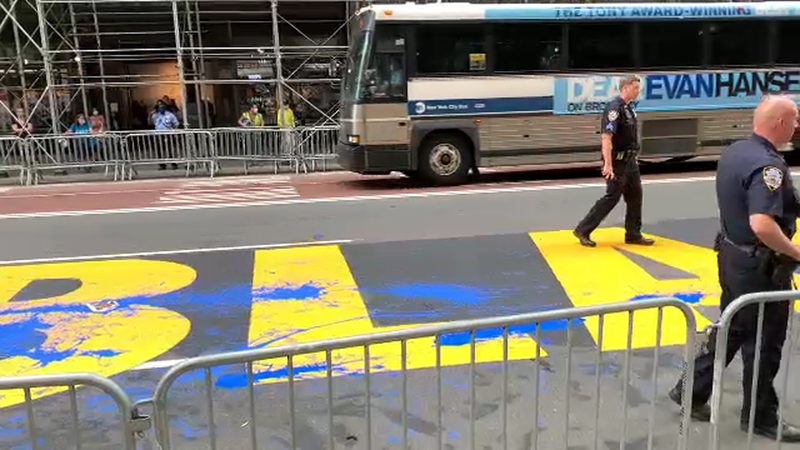 NEW YORK (WABC) -- The "Black Lives Matter" mural painted in front of Trump Tower on Fifth Avenue has been vandalized for a second time this week, authorities said.

Eyewitness News reporter CeFaan Kim says he's hearing a small group of protesters may have been there at the time.

The "Black Lives Matter" mural painted in front of Trump Tower on Fifth Avenue has been vandalized for a second time this week, authorities said.

Police arrested Juliet Germanotta, 39, Luis Martinez, 44, and D'Anna Morgan, 25, and charged them with criminal mischief. They were released with a desk appearance ticket.

In addition, a 64-year-old woman was arrested and given a criminal court summons for illegal posting of flyers.

A few hours later, the mural was being repaired by DOT crews.

The first incident happened back on Monday. Police were still looking for one person in that case who walked up to mural and dumped red paint over the letter V in "Lives," which splattered across the mural as cars drove over it.

"I saw somebody out of the corner of my eye putting down a bag... and I was thinking 'oh he's gonna get in my shot,'" Nikki Ross, who recorded the video, told Eyewitness News. "And when I got to about the clock, he took out the paint and splattered it across the mural."

Ross said the last few months have awakened her to her privilege and it's her responsibility as a white woman to call out injustice.

"The #BlackLivesMatter movement is more than words, and it can't be undone," he said on Twitter.
EMBED More News Videos

The suspect was described as a white male wearing a black hat and a black T-shirt who fled westbound on West 56th Street.