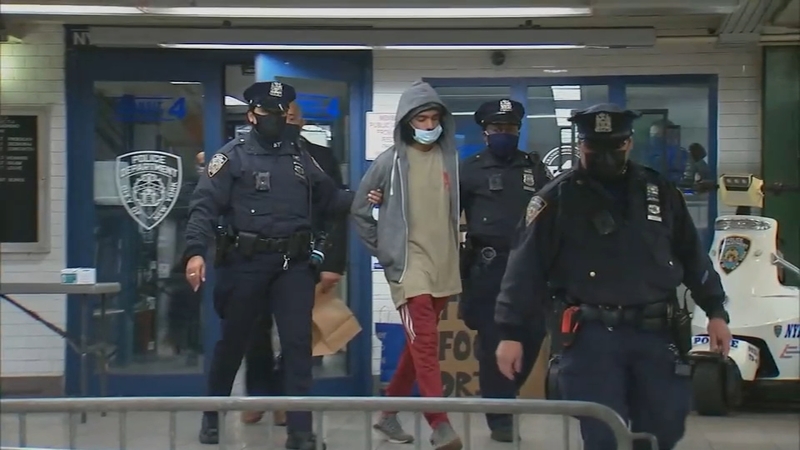 UNION SQUARE, Manhattan (WABC) -- A woman is lucky to be alive after she was pushed onto the subway tracks in Union Square station in Manhattan Thursday morning, and the horrifying crime was caught on surveillance video.

It happened at 8:30 a.m. Thursday, and the 24-year-old suspect, who is said to be emotionally disturbed, can be seen watching and waiting for the train to arrive before he pushes the innocent victim.

"The whole incident is captured on surveillance video," NYPD Transit Chief Kathleen O'Reilly said. "It's very disturbing. We see him waiting, calculating for the train to approach the station. And at the opportune moment, he pushed the victim to the tracks."

Amazingly, the woman in her 40s managed to roll over, and the train made minimal contact with her. Officials say no words were exchanged between the two.

"She fell, fortunately for her, between the roll bed and the rails," O'Reilly said. "Through the grace of God, sustained minor injuries."

A transit worker saw the incident and immediately jumped into action, holding the suspect -- identified as Aditya Vemulapati -- until police arrived.

Vemulapati was taken to a hospital for evaluation and is charged with attempted murder, felony assault, and reckless endangerment.

His previous address is in Westland, Michigan, but he is said to be currently homeless.

"As soon as the incident happened, the subject saw an MTA worker and put himself on the ground," NYPD Transit Captain Anthony Guadagno said. "Immediately thereafter, an officer assigned to Transit District 4 made the apprehension."

The victim was conscious and alert, and she was taken to Bellevue Hospital with minor injuries.

Just the day before, a man pushed an off-duty UPS worker onto subway tracks on the southbound D line at the Bryant Park Station just after 7 p.m.

Authorities say the suspect, 23-year-old Jason Pena, asked the victim for money before pushing him onto the tracks.

On January 16, Pena was also arrested for allegedly punching a 62-year-old man riding on a southbound F train in the vicinity of the 23rd Street station in Chelsea. That victim sustained lacerations.

"We've got a crisis in this city, and it absolutely has to be addressed," NYC Transit interim President Sarah Feinberg said. "It can't just land in the transit system because we're underground."

Feinberg said this is a small part of a much bigger problem and had harsh words for Mayor Bill de Blasio, saying riders need to feel safe, and pandemic or not, this cannot continue.

"We cannot be a collection or a location where we just gather folks who are experiencing a mental health crisis," she said.

According to the NYPD, there were 16 subway pushing incidents in all of 2019. This year so far, there's been just as many.