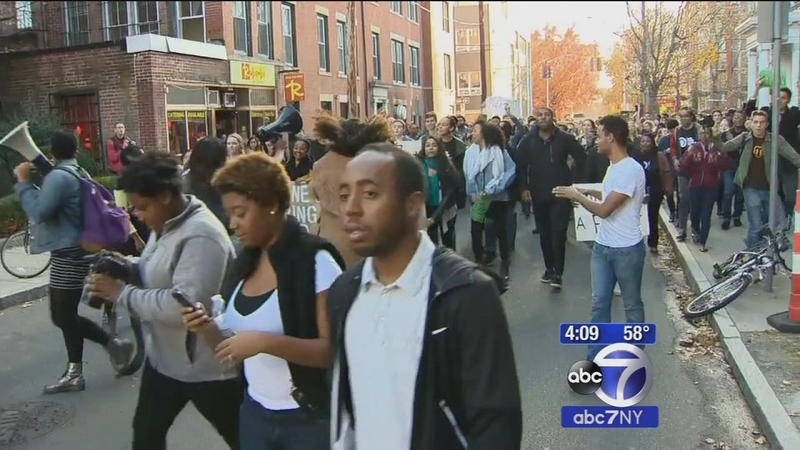 BOSTON -- A 19-year-old Northwest Missouri State University student from Blue Springs has been charged with two counts of making a terrorist threat.

Nodaway County Prosecutor Robert Rice on Thursday filed one misdemeanor and one felony count against Connor Stottlemyre, a freshman at the school in Maryville.

Stottlemyre is accused of posting a threat on the Yik Yak social media app that read, "I'm gonna shoot any black people tomorrow, so be ready." He was arrested Wednesday in his dormitory.

Meanwhile, the man accused of making online threats to shoot blacks on the University of Missouri's Columbia campus said he mimicked postings that preceded a deadly college shooting spree in Oregon last month, according to a probable cause statement obtained by The Associated Press on Thursday.

Hunter M. Park, a 19-year-old sophomore at one of the other University of Missouri System campuses in Rolla, is charged with making a terroristic threat, which is punishable by up to seven years in prison. He was expected to make his first court appearance Thursday afternoon via a video feed from jail, where he's being held without bond.

The threatening posts showed up Tuesday on the anonymous location-based messaging app Yik Yak, and were concerning enough that some classes were canceled and some Columbia businesses closed for the day. They were made during a time of racial unrest on campus that resulted in the resignations Monday of the university system president and the Columbia campus chancellor.

One of the threats said: "Some of you are alright. Don't go to campus tomorrow" - a warning campus police Officer Dustin Heckmaster said in a probable cause statement that he recognized as one that appeared ahead of last month's Oregon college shooting involving a gunman who killed nine people and himself.

Heckmaster wrote that Yik Yak willingly gave him the cellphone number that Tuesday's poster had used to create the account from which the threats originated. AT&T later told investigators that the number was Park's and that cellphone towers showed that the postings came from the Rolla area, the officer wrote.

University of Missouri-Columbia police records show the department had contact with Park last January, Heckmaster wrote without elaborating. Those records noted that Park was a student at Missouri University of Science and Technology in Rolla, where Heckmaster confronted Park early Wednesday in the sophomore computer science major's dorm room.

Heckmaster wrote that Park admitted the posts were "inappropriate." He said he asked if the threats amounted to "saber rattling," and Park responded, "pretty much."

When questioned specifically what he meant by the phrase, "Some of you are alright. Don't go to campus tomorrow," Park "smiled and stated, 'I was quoting something,'" Heckmaster wrote. When pressed whether it was mimicking the Oregon shooting's posting, Park replied, "Mmhmm."

A message left on Park's mother's cellphone was not returned, and there was no response to knocks on the door of the family's home in the affluent St. Louis suburb of Lake St. Louis.

Authorities also are investigating another threat on Yik Yak, this one leveled at the Rolla campus by someone saying, "I'm gonna shoot up this school." And police at the Columbia campus say someone spray-painted over part of a sign early Thursday at the black culture center. They were reviewing video surveillance from the area, a school spokesman said.

On Wednesday, the university said an employee who was among those who clashed with a student photographer during campus protests was placed on administrative leave while her actions are investigated.

Janna Basler is the school's director of Greek life. The videotaped clash helped fan a debate about the free press. Basler did not return a message seeking comment.

Months of protests culminated in a tumultuous week on the Columbia campus.

Back in September, the student government president reported that people shouted racial slurs at him from a passing pickup truck, galvanizing the protest movement. Last week, a graduate student went on a hunger strike to demand the resignation of university system President Tim Wolfe over his handling of racial complaints. The system's governing board was expected to name Wolfe's interim replacement on Thursday.

Then more than 30 members of the Missouri football team refused to practice or play in support of the hunger striker. Those developments came to a head Monday with the resignation of Wolfe and Chancellor R. Bowen Loftin, the top administrator of the Columbia campus.