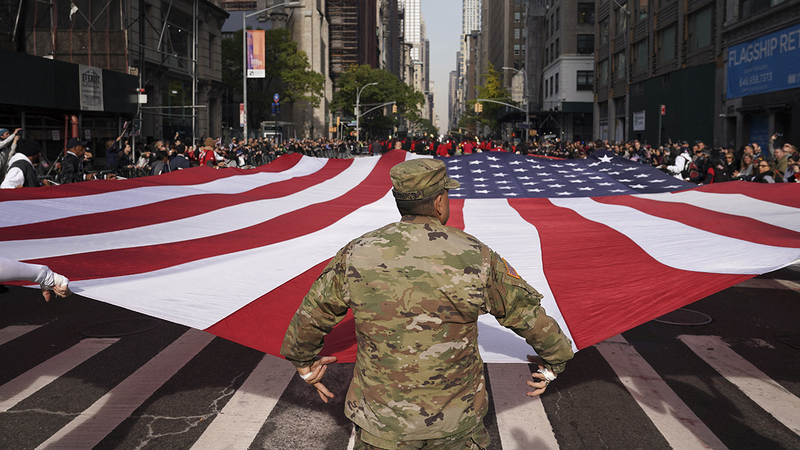 NEW YORK (WABC) -- Thousands took to the streets Monday as New York City saluted veterans and current members of US Armed Forces at the 2019 New York City Veterans Day Parade, and WABC-TV is proud to have been the broadcast home for the event.

The parade was hosted by Eyewitness News' Sam Champion, Michelle Charlesworth and CeFaan Kim, and it honored the service of veterans and those currently serving.

Over 25,000 people participated, including vets, active-duty military personnel, and high school and college bands and floats.

President Donald Trump, accompanied by U.S. Marine Corps Commandant Gen. David Berger, delivered remarks and participated in a wreath-laying during the Opening Ceremony -- the first U.S. president to accept the regularly-issued invitation from the organizers.

He kicked off New York City's Veterans Day Tribute by saying the nation's veterans "risked everything for us. Now it is our duty to serve and protect them every single day of our lives."

Trump spoke at the opening of the 100th annual parade organized by the United War Veterans Council in Madison Square Park.

As Trump spoke, more than 100 protesters gathered and could be heard with whistles and booing. Some chanted "lock him up" and "shame, shame, shame."

Trump told the crowd that the nation's veterans often came face to face with evil and did not back down.

"You returned from war and you never forgot your friends who didn't return," Trump said. "But your greatest tribute of all is the way you lived your lives in the years since."

The battle for Iwo Jima, which took place during World War II, is remembered as an iconic moment the history of the United States Marine Corps, which will lead the parade as this year's Featured Service Branch. This year's event also marks the Centennial of Veterans Day (formerly Armistice Day), celebrating 100 years of honoring America's veterans and active service members.

WABC, which is part of Walt Disney Television, has a long history of supporting veterans and veteran service programs. The station actively participates in the Disney's Heroes Work Here program and has sponsored numerous veterans-related events, including the Stand up For Heroes benefit and the Bob Woodruff Foundation.

"WABC is proud to stand alongside our veterans as they celebrate 100 years of this magnificent event in our city," said Debra OConnell, President and General Manager of the station. "We are thrilled to add the New York City Veterans Day Parade to our growing list of impactful community events." In addition to the parade broadcast itself, the station will produce content about veterans and the programs and services of the UWVC year-round.

The New York City Veterans Day Parade is our nation's largest event honoring service. Produced by the United War Veterans Council (UWVC), the parade provides the public with the opportunity to salute our veterans and military and raises awareness for organizations working to serve their needs. It is the centerpiece of an annual citywide effort to honor our veteran's community. The Parade features veterans groups and service providers, military units, youth, and civic groups, top high school bands from across America, vintage vehicles, floats and more. It is supported by numerous sponsoring partners, including UWVC Recycling, First Data, Cushman & Wakefield and Wounded Warrior Project. For more information, visit uwvc.org/vetsday.

About WABC
WABC-TV has been the leader in local news and entertainment programming in the New York City area for more than 60 years. Producing more than 45 hours of live, local news and weather each week, Channel 7 "Eyewitness News" is the most-watched local news in New York and the United States. WABC-TV also produces "Live with Kelly and Ryan," weekdays at 9:00 a.m., which is seen in more than 200 markets across the U.S. Quality news and programming, cutting-edge technology and ongoing community outreach are the hallmarks of excellence that have consistently kept WABC-TV New York's No. 1 station and the most-watched television station in the nation.