Prosecutors: Man accused in deadly tractor-trailer crash in Elizabeth has been arrested 55 times

Anthony Johnson reports on the court appearance by the man accused in a fatal tractor-trailer crash in Elizabeth.

ELIZABETH, New Jersey (WABC) -- The driver of a tractor-trailer, accused in a fatal crash in Elizabeth, pleaded not guilty Wednesday.

Danny Clyde Williams, 57, is accused in the death of 24-year-old Jeffrey Oakley. In court Wednesday, prosecutors said Williams has been arrested 55 times and has violated his parole up to seven times.

When he was taken into custody this weekend, police said he had a strong smell of alcohol on his breath.

Oakley, 24, was killed Friday night when a tractor-trailer driven by Williams and being chased by police slammed head-on into his car.

Two passengers were in Oakley's car during the crash, and both are now recovering from their injuries. Oakley was an aspiring rap artist who was also starting his own line of clothing. He was just two blocks from home when the crash occurred.

Williams arrived in court wearing a neck brace and had several scratches on his face, the result of the driving rampage.

He faces aggravated manslaughter, death by auto and aggravated assault charges in the Elizabeth incident.

Williams lives in Colorado, but has been arrested dozens of times in California.

Prosecutors said he uses multiple names, has provided fake Social Security numbers to police officers, and has five convictions for felonies including domestic violence and battery.

Relatives of the victim were unaware until Wednesday of the driver's long criminal record, including felonies and parole violations.

"Learning that solidifies that a lot of things happen that shouldn't happen in the first place. That should have never took place..that's crazy," said relative Joshua Pryor.

Bail for Williams is set at $2 million. If convicted on all charges, he could spend up to 40 years in prison. 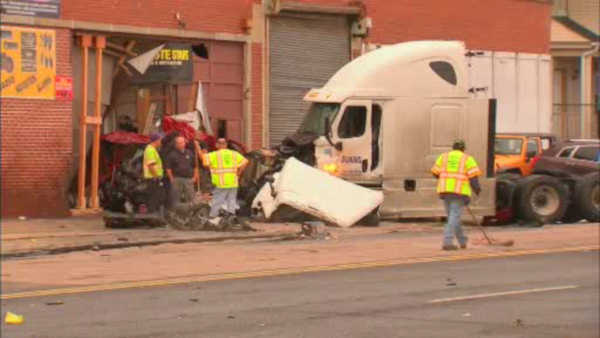