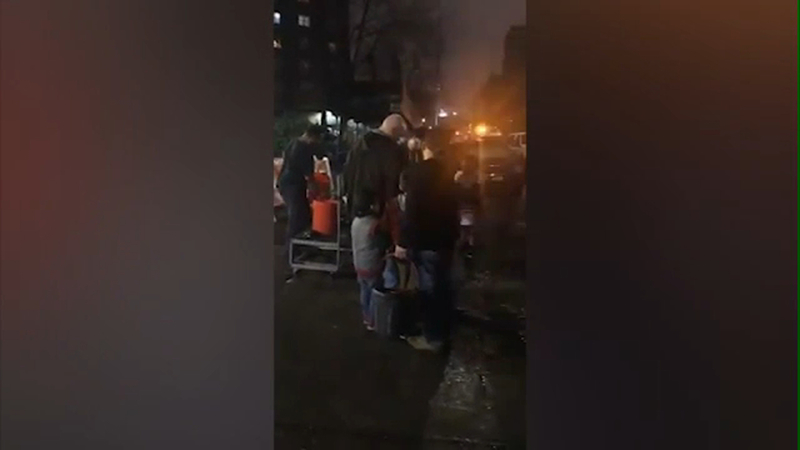 MOTT HAVEN, Bronx (WABC) -- Hundreds of residents who live in New York City public housing are demanding answers after a water crisis over the weekend.

People living in a complex in the Bronx had to get their water from a fire hydrant.

The water went out just before noon Sunday at the Patterson Houses in Mott Haven. NYCHA claimed temporary pumps didn't have enough power to get water to rooftop tanks.

The complex includes more than 15 buildings, most of them 13 stories tall.

The fire department responded, opening a hydrant, and about 4,000 tenants were forced to take buckets and haul water Sunday night.

Clarisa Alayeto, who grew up in the housing complex, was visiting her grandmother Sunday to prepare lunch. She was furious with NYCHA.

"Last night what I saw, when people were going to the fire hydrant to get water was heartbreaking, it's demoralizing," said Alayeto. "This is New York CIty."

He then held up an old calendar belonging to a tenant with days marked without heat or hot water. Diaz said, several times pointing to subsequent days, "no heat, no heat, no hot water."

The water came back on Monday afternoon.

We asked one tenant, Norma Nieves, how she felt about NYCHA after the water was finally back on after 14 hours.

Another tenant, 91-year-old Dorothy Holnes, who's lived there for 57 years, said she despises NYCHA "because they should be paying ME to stay here."

That price tag was $31 billion and so far there's no clear way to pay for all of it.

Despite President Trump not being a fan of public housing, some tenants are now advocating a federal takeover.

"The city can't do this," said Assemblyman Michael Blake, who's running for Public Advocate. "It's clear and obvious that city leadership cannot fix this problem."