Rescuers reunited with the people they saved from floodwaters after Isaias 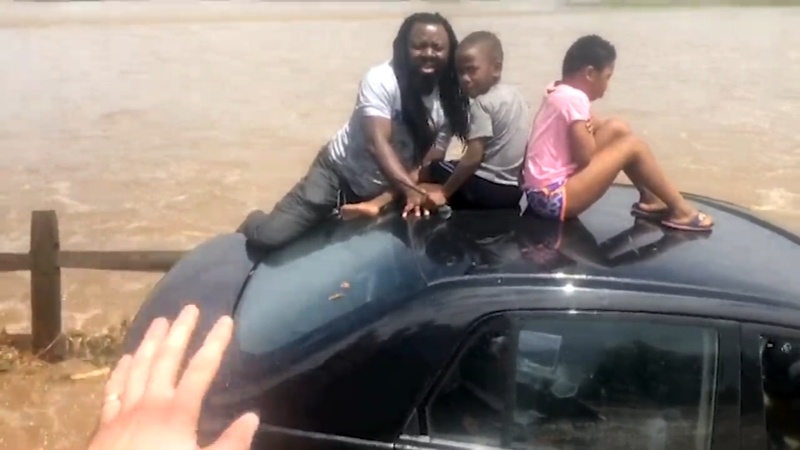 Rescuers reunited with the people they saved

PENNSYLVANIA -- It was the story of humanity out of Pennsylvania that was caught on camera and captivated our hearts.

The four strangers who saved a man, his two kids, his niece and his little brother were reunited on Friday.

"We were all, amazingly, a team - a team that worked together. Never seen each other, but worked together as a partnership like it was natural," said Dan DiGregorio of Phoenixville.

"It's the first time we've seen each other since," said Tom Garner.

Dazoh Dua, who had moved to Coatesville from West Africa, was trapped when waters from Tropical Storm Isaias surged and his car started sinking in West Marlborough Township last week.

Four strangers, turned good Samaritans, saved a father and four children from a sinking vehicle as the floodwaters continued to rise.

"I was a little bit crying for my kids. But for me I was fine, that water couldn't take me anywhere, it was for the kids," Dua said.

When they saw what was happening the four strangers - including a well-timed city worker with a piece of heavy equipment - reacted quickly to save them.

"Stay there! Don't move," one of them could be heard to say during the rescue that was caught on video.

They urge Dua to get the children to them.

"Pretty high likelihood of something bad happening and the footage shows that. The water was whipping," said David MacDonald.

There was one petrifying moment where the oldest boy almost slips away.

"To this day your little brother's eyes are planted in my head. I mean, thank God. He is absolutely okay and everyone's okay," said DiGregorio. "It's really awesome to be back together with these guys, everyone, because you guys are all family for the rest of my life."

They all believe they were meant to be just where they were.

"Everybody just came. It was amazing, everybody help. I appreciated that after everything. I couldn't stop telling them, 'thanks'" said Dua.

Dua's car was totaled, and the community is coming together once again to start a fundraiser to get him a new one.