Flash flooding prompted the rescues of dozens of motorists and residents who became trapped in their vehicles and homes from Central Jersey up through Connecticut, and several roadways were closed and schools evacuated.

Bayonne was especially hard hit, and Pastor Michael Kelly with the Beacon Christian Academy said all students at the elementary school and day care center were evacuated.

There was also flooding in the gym and the nursery, so the schools were closed Wednesday. Pastor Kelly said they will need to take the day to sanitize the areas before the students can be allowed back inside.

Clarendon Elementary School in Secaucus was also evacuated because the basement flooded, and there were concerns an electrical fire could break out. In Ridgefield, a military surplus truck helped navigate the deep water to rescue 16 people.

Additionally, more than 100 people had to be rescued from an industrial park in Fairview.

Motorists were urged to drive with caution and advised against driving through deep water, and pedestrians were also warned against walking through the floodwaters because there could be displaced manhole covers. Still, many attempted to brave water that was deeper than it appeared.

More than 8 inches of rain fell in some places in Connecticut, and at least one person is still missing in Connecticut after disappearing in flooding along the Quinnipiac River.

In Stamford, firefighters used a boat Tuesday afternoon to ferry students from a school bus stuck on a flooded street to dry land.

Bronxville schools were closed Wednesday due to flooding, and Bridgeport Public Schools operated on a two-hour delay. Schools in East Haddam and Lebanon were closed because of severe road damage.
EMBED More News Videos

AJ Ross has the latest on school floodings due to severe weather.

Some residents along the Indian River in Clinton were evacuated from their homes, and officials were searching for a vehicle that might be submerged in the Housatonic River in North Canaan.

In Norwich, two people were rescued Wednesday from a recreational vehicle surrounded by three feet of water in a parking lot.

Water was waist-high in Port Jefferson on Long Island, and residents said the flooding came about much faster than they'd ever seen.
EMBED More News Videos

Stacey Sager has the latest on the flooding damage in Port Jefferson.

Perhaps the worst damage was was at Theatre Three, a non-profit organization located inside a historic building. Water rushed in from both the parking lot and nearby Main Street, as a group of children inside auditioned for the production of "A Christmas Carol."

"It was just too much too soon," facility manager Brian Hoerger said. "Double doors normally open out, but they buckled, opened in. And that's when we went to higher ground."

The company is now asking for donations to rebuild. More information can be found by clicking here.

In New York City, subway service was impacted when stations became flooded, but things were back to normal Wednesday morning.

CLICK HERE for the latest AccuWeather alerts and advisories. 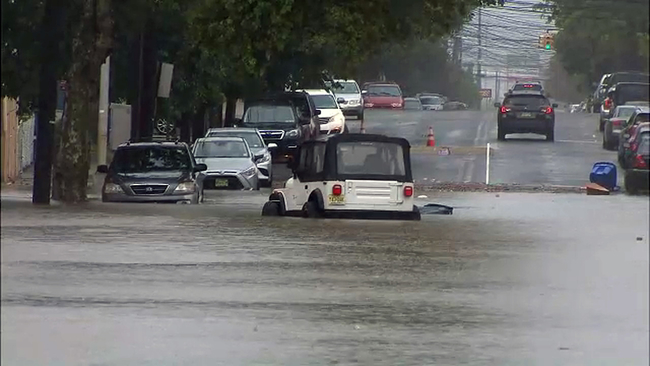