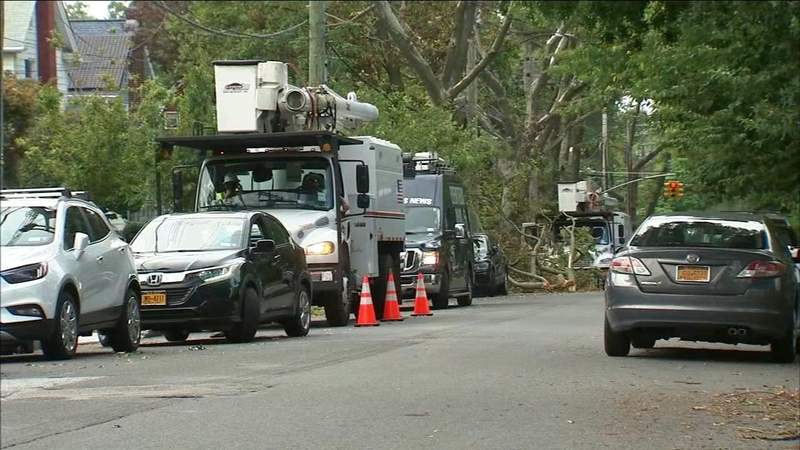 The latest outages followed a large but brief outage in Upper Manhattan before dawn Friday.

Before Friday's additional outages, more than 20,000 people were in the dark in Queens, part of the aftermath from Isaias.

Citywide there are 3100 work orders for downed trees. We know nearly 600 have been cleaned up.

Citizen App video shows the moments right after a tree came down on Fleet Street off of 68th Avenue Thursday night in Forest Hills.

It came crashing down on a car that was driving down the street. It was likely the soaked ground that led to this tree falling.

Thankfully it appears the driver was able to get out, and no one was seriously injured.

Throughout the city - and particularly in Queens - there are still hundreds of downed trees.

In Astoria, a giant tree came down on several cars days ago. Some thought this would have been cleaned up by now.

The street has been impassable since the storm, and residents are waiting for crews to get there and clear the mess.

Mayor Bill de Blasio is blaming ConEd for the delay in clearing streets.

"I think we've all been frustrated over the years," the mayor said Thursday. "We depend on Con Edison, and we don't always get the answers we need, and the follow through."

"The City of New York will do everything in our power to make sure that ConEd keeps moving and gives people back their power, especially with everything else going on," he continued.

In a statement, Acting Queens Borough President Sharon Lee made a scathing indictment of ConEdison.

"Unacceptable is an understatement. Con Ed's own published numbers indicate the company surged power restoration in other boroughs, but deprived Queens - the hardest hit borough from the start... Nearly 72 hours after the storm, over 28,000 Queens customers - more than the other four boroughs combined," Lee said.

ConEdison says it expects the vast majority of outages to be restored by Sunday night.

"Much of the work involves infrastructure rebuild, not repair. We are literally in some cases after trees come down replacing multiple poles, transformers, really putting in new infrastructure rather than putting in old, because of the damage," Con Edison President Tim Cawley said.