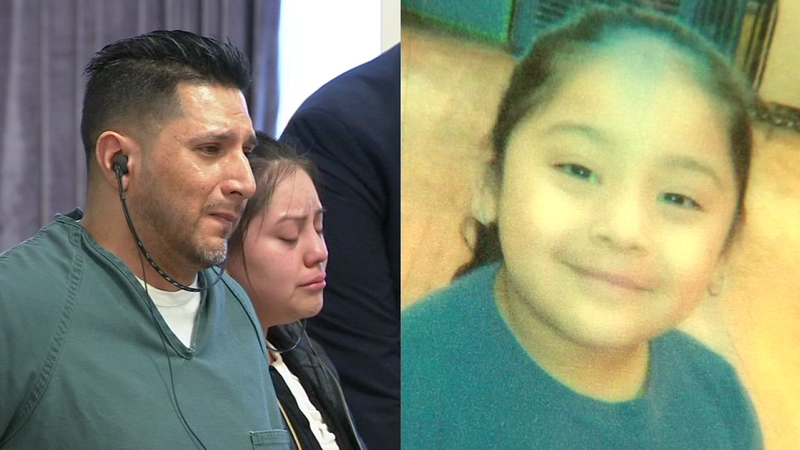 WEST NEW YORK, New Jersey (WABC) -- The man who fatally struck a 7-year-old girl in a New Jersey hit and run last year was sentenced Friday to 11 years in prison.

Shaila Pichardo and her mother were holding hands as they walked to school in the crosswalk when they were struck by a late-model Chevy Tahoe at the intersection of 61st Street and Van Buren Place in West New York on February 19, 2016.

The incident was caught on surveillance camera, which helped lead authorities to 38-year-old Fabian Rodriguez. The video showed the vehicle stop before Rodriguez got out, surveyed the scene, jumped back in the SUV and fled the scene.

"He got out of his car," assistant prosecutor Leo Hernandez said in arguing for the maximum sentence. "He looked at Shaila."

Rodriguez gave a tearful plea for forgiveness before he was sentenced, saying he would give his life for the one he took.

"I made a big mistake the date of the accident," he said. "The only thing I'd like to say is for the family to forgive me for all the pain I've caused."

Pichardo's parents were in the courtroom for the sentencing, and her father spoke.

"I come before you with all due respect, to ask for justice in the name of my daughter," Javier Pichardo said.

The judge said the key to his decision was that not only did Rodriguez flee the scene, but he also attempted to cover his tracks to avoid getting caught. Rodriguez' wife, Joanna Rosas-Alvarez, was not in the SUV at the time of the hit and run, but she lied to police and reported the SUV stolen before getting it washed and having decals removed in an attempt to change its appearance.

"They had the car washed, and they had stickers removed from the car so you couldn't tell that was the car that was involved in the incident," Hernandez said.

"Apparently the 'Oh my goodness, what have I done? I need to go back and make this right' moment never came to Mr. Rodriguez," the judge said.

"If there was any way to save that little girl, that Mr. Rodriguez, and after discussion with him over a year, would have stayed," she said.

Rodriguez pleaded guilty to leaving the scene of an accident that resulted in death, as well as endangering an injured victim by leaving the scene after the girl's mother had also suffered serious injuries and hindering apprehension for falsely reporting his vehicle stolen.