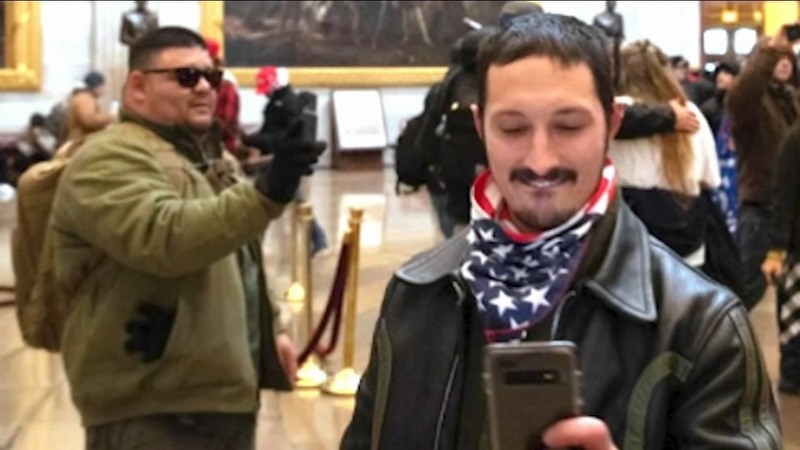 NEW YORK (WABC) -- A Metro North employee who was identified as one of the rioters during the Capitol siege has been fired, according to officials.

Metro-North Railroad President Catherine Rinaldi made the announcement of Will Pepe's firing in a statement on Tuesday.

"We made it clear since the Jan. 6 attack on our nation's Capitol building that the apparent participation by one of our employees was unacceptable and inconsistent with Metro-North's values," Rinaldi said. "After affording Mr. Pepe the due process to which he was entitled under his collective bargaining agreement, we have terminated him today for conduct unbecoming a Metro-North employee."

The 31-year-old was taken into custody back in January after his participation in the Capitol riots on January 6.
EMBED More News Videos

A Metro North employee who was identified as one of the rioters during the Capitol siege has been fired, according to officials.

"Participation in the riot which resulted in deadly violence at the Capitol last week was abhorrent to the values of the MTA and New Yorkers, and those who attacked that symbol of American democracy disqualified themselves from working for the People of New York," MTA Communications Director Tim Minton said in a statement. "Mr. Pepe is entitled to due process and was suspended last week as part of that process. We are cooperating with federal law enforcement agencies in their investigation and prosecution of those involved."

The MTA employee was recognized by both colleagues and management from a photo distributed by law enforcement.

MTA management moved swiftly, and Pepe was suspended without pay.

"Effective immediately this individual has been suspended from Metro-North without pay and will be disciplined in accordance with his collective bargaining agreement pending an investigation," said Ken Lovett of the MTA. "This alleged conduct is abhorrent and goes against the values of Metro-North, New York and the nation."

Pepe falsely called in sick while he participated in the unlawful entry and occupation of the U.S. Capitol building.

The 31-year-old Pepe was hired six years ago.

He was a laborer assigned to a machine shop in Putnam County.