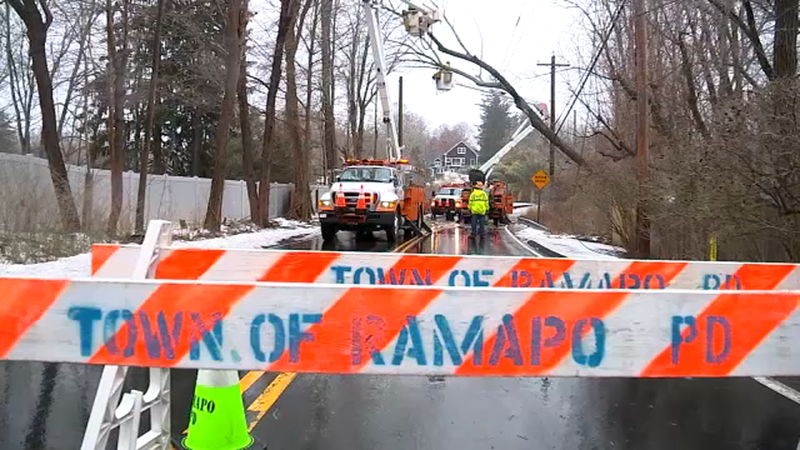 Wintry mix of ice and freezing rain impacts the Tri-State

NEW YORK (WABC) -- Communities across the Tri-State geared up for a potentially treacherous icy mix as temperatures plummeted Friday.

The National Weather Service issued a special statement ahead of the evening commute for drivers to beware of icy conditions on the roads across the region.

New Jersey officials prepared for dropping temperatures and "a rain to sleet and snow" line that "is difficult to pinpoint right now."

"We will certainly be on with our county OEM coordinators and National Weather Service, monitoring that," said NJ State Police Superintendent Col. Patrick Callahan. "That's probably going to look like a 24-hour precipitation event, Thursday into late Friday night. We are certainly watching that."

"It may look like it's simple and black and a little wet, but this is going to be treacherous in our state, really more central and northern," Murphy said. "This is one of these days when the commuting, the driving will be very, very treacherous. It gets worse before it gets better."

Toni Yates has more on conditions from Butler, New Jersey.

According to the website Flight Aware, more 30% of flights at Newark Liberty International Airport have been canceled.

A large number of delays and cancellations were also reported at LaGuardia and JFK airports.

New York Governor Kathy Hochul urged people to stay off of the roads as they are "absolutely treacherous."

"This storm is throwing everything at us, we have snow, we have sleet, we have icy roads," Hochul said.

She said that they expect most of the weather event to abate by Friday evening, but until then there would be a lot of freezing rain.

The effects of hours of freezing rain were felt in Rockland County where crews geared up for the most difficult type of all winter storms.

The biggest concerns were streets becoming covered with ice and slippery and a more widespread buildup on trees and power lines that could lead to outages.

In New York City, the Sanitation Department has a 'winter operations advisory' in effect starting at 7 a.m., which is their lowest level of winter messaging.

Slippery roads were reported overnight in parts of the city, including Queens, where a driver crashed into a light pole at 171st Street and Jamaica Avenue just after 4:30 a.m.

Alternate Side Parking regulations remain suspended through Saturday for cleanup from last weekend's snow, although if you look outside, nyc looks like its melting away in the warmer temperatures and rain. Parking meters are in effect.

NYC also issued a travel advisory for Friday into Saturday, predicting 'heavy rain and sleet are expected during the morning and evening commutes with dangerous icy conditions on the roads.'