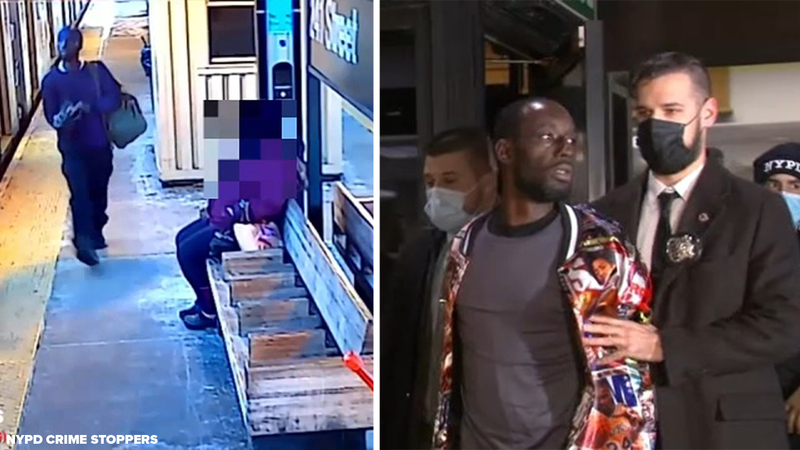 Man arrested after woman attacked with human feces in NYC

BRONX (WABC) -- A suspect is in custody after a woman was attacked with human feces inside a Bronx subway station.

A suspect is in custody a woman was attacked with human feces at a Bronx subway station.

According to police sources, Abrokwa has 44 prior arrests and was taken into custody at homeless shelter on Bronx Boulevard.

Surveillance video captured a man attacking an unsuspecting woman by striking her in the face with human feces.

The 43-year-old woman was sitting on a bench when the man suddenly struck her in the face and the back of her head with human feces. CeFaan Kim has the details.

"I got out of work and was waiting for train, sat down for a moment," the victim said through a translator. "All of a sudden, a man approaches me. He hits me in the face and throws a bag of feces. He spreads it all over my face, in my hair, without a motive, for no reason."

Police say the 43-year-old woman was sitting on a bench when the man suddenly struck.

"I was surprised, I was talking on the phone...he must have seen me sitting there and wanted to get me," she said. "It happened so quickly, I didn't even realize. Once he left, it sunk in what occurred."


The attacker then fled in an unknown direction.

"Really unbelievable, because you have to go out every day to work," the victim said. "I have two small children and need to work."

An MTA spokesperson released a statement in regards to the incident and the arrest of the suspect:

"The video speaks for itself and must have been as awful to experience as it is disgusting to watch. We appreciate the NYPD's excellent detective work leading to a rapid arrest of the suspect. It's another example of why we fully support efforts by the governor and mayor to deliver essential mental health services to those who need them."

The victim said she is now fearful every time she gets on the subway.

"Two days later, a man followed me on the train," she said. "I was sitting on the train, a man looked at me. He looked a little strange, so I moved to another subway car, and he followed me. Thank God there were other people on train, so nothing happened."

She works as a home care attendant and travels throughout the city.

"It's very dangerous," the victim said. "You never know when something can happen."