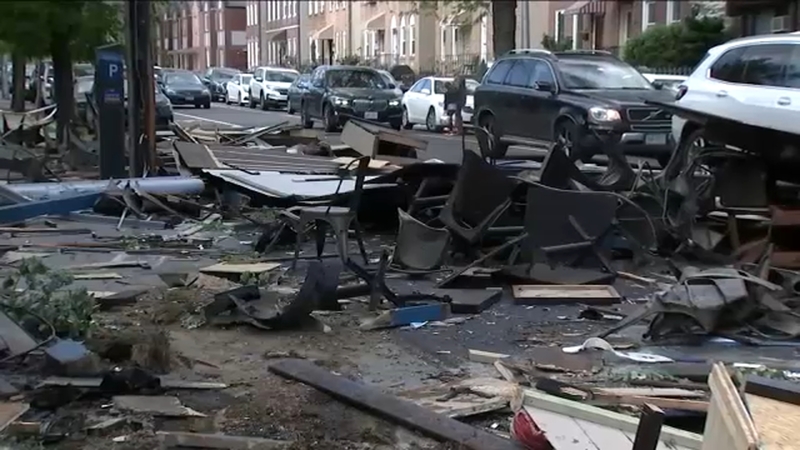 ASTORIA, Queens (WABC) -- A deliveryman on an e-bike was killed and others were injured after a car crashed into an outdoor dining area in Queens Thursday night.

It happened just before 8 p.m. in front of the Rosatoro Restaurant on 35th Street and Ditmars Boulevard.

Police say 37-year-old Xing Long Lin, of Queens, was on his scooter waiting for a order when the 60-year-old driver of a Mercedes SUV lost control trying to pass two cars in the bike lane and plowed through the structure and into a tree.

The shooting victims were eating at separate outdoor tables, and did not know the gunman, or each other.

On Friday, Macy Carver and Olivia Del Rio placed flowers amid the wreckage for a deliveryman they didn't know, who was struck and dragged as the car hurtled toward the restaurant.

"I don't know him, but my window is literally just right up there," Carver said. "Going to sleep last night, which is weird knowing it happened right outside the window. It's terrible that we just never know."

The impact left the outdoor dining enclosure in ruins, demolished in a shower of lumber, steel and auto parts. People in the street and inside the restaurant ran to help.

Lin was found unconscious and unresponsive and was pronounced dead at the hospital.

A 32-year-old female was also found in the roadway with injuries to both legs, suffered when she was struck with debris, and she is listed in stable condition.

Despite the tragic nature of the event, officials say it could have been much worse had the outdoor dining area been packed.

The manager of the eatery said it was too cold for outdoor dining, so the area was closed.

"It was just not a great day," general manager Kevin Sales said. "And then, out of nowhere, this happened. I'm very glad we weren't seating anybody outside."

The woman driving the SUV was hospitalized in serious but stable condition.

There is ZERO tolerance for reckless driving. I feel incredible pain for Xing Lin’s family.

No arrests have been made, and the investigation is active and ongoing. Police believe speed may have played a role.

Mayor Bill de Blasio declared, "This is going to be the summer of New York City" during the announcement Thursday morning.

The mayor went on to say outdoor dining is safe and that the city will continue to "deepen our commitment to Vision Zero" and "protect pedestrians and outdoor diners alike," but still, this was only the latest in series of spectacular crashes involving out of control vehicles and outdoor dining enclosures in New York City.

While the city has strict guidelines for construction and ventilation to protect diners from COVID-19, there are no meaningful standards for protecting them from collisions.

Astoria resident Sheila Jones has fears about dining in the city streets.

Mitch Schwartz, director of rapid response and deputy press secretary, for Mayor Bill de Blasio, said there have been almost 6,000 restaurants operating in the roadway since last summer, and this is only the 11th incident of any kind and the first with a fatality.

"Thankfully, none have been anything close to this significant," he said. "Most have just involved some light or moderate property damage. With that many restaurants operating in the roadway for the better part of a year, that is actually an extraordinary safety record."

Assemblyman Zohran Kwame Mamdani, who represents Astoria, has posted a GoFundMe for the deliveryman.

He is asking the community to raise $10,000 to support his wife and two kids for funeral expenses and their immediate needs.