Police identify suspect who barricaded himself in Yonkers home, shot at officers 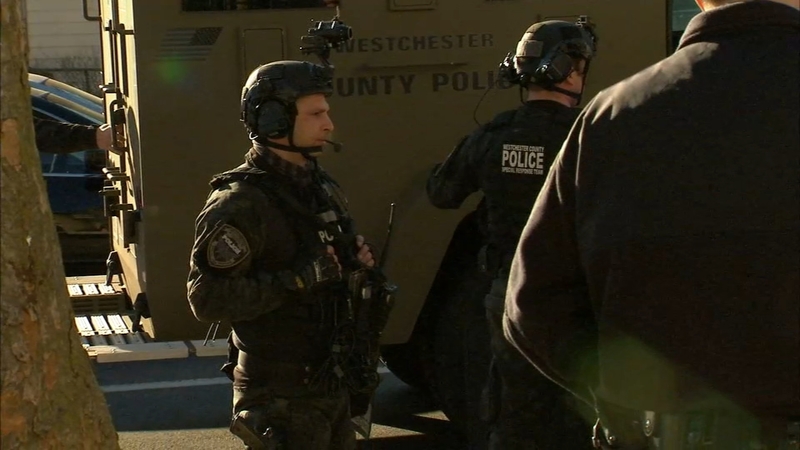 YONKERS, Westchester County (WABC) -- Police have identified the armed suspect who exchanged gunfire with police officers and then barricaded himself inside his house in Yonkers Saturday.

They say Kastsaridis was known to Yonkers Police, and had an active warrant for his arrest stemming from an incident on March 1, where it is alleged that Kastsaridis threatened a neighbor with a handgun.

On Saturday, an Emergency Service Unit went into the home and found the Kastsaridis on the floor with a self-inflicted gunshot wound. No one else was hurt.
EMBED More News Videos

An investigation is underway after an armed man was barricaded inside his home in Westchester County on Saturday.

Yonkers Police say they were actively engaged in a crisis negotiation event with the suspect, who barricaded himself at a residence on Livingston Avenue. Shortly after 7:30, officials reported the barricade situation was over.

Officers arrived at the home at 10:44 a.m. to conduct a welfare check and Kastsaridis met the officers at the front door.

"Upon speaking to the officers he relayed that he did not call them, did not want their assistance, and he told the officers that he had a gun and wanted to take them with him," Deputy Chief Joseph Monaco said.

The officers retreated to the street and called for backup.

Officers from the Emergency Services Unit arrived, established a perimeter, and attempted to call the suspect.

"He then came to the front door, produced what appeared to be a rifle, and began shooting at the police officers at the scene," Monaco said.

Police at the time of the incident, cordoned off the area while they tried to resolve the situation.

Anyone within a one-block radius of the home was told to shelter-in-place.

All others were urged to stay away from the area.

"I am incredibly proud of the actions of our Police Officers and Supervisors during this incident - their professionalism and courage in the line-of-fire is why we call them heroes; to confront danger and protect their communities is the highest calling in public service," Police Commissioner John Mueller said.

It's unknown at this time how many shots were fired by both Kastsaridis and officers.