WABC
By Eyewitness News
NEW YORK (WABC) -- The man accused of opening fire on an NYPD van in the Bronx last weekend and then walking into a precinct the next day and shooting an officer was indicted on a dozen counts of felony attempted murder Friday.

Robert Williams was in court to face charges in the second incident. He is charged with two more counts of felony attempted murder for the first.

Dozens of NYPD officers and union leaders arrived early and packed the courtroom in support of the two officers who were injured in the shootings.

Officer Paul Stroffolino was driving the NYPD van and was struck by a bullet in the neck and chin. Lieutenant Jose Gautreaux was inside the 41st Precinct and was shot in the arm. Both are now recovering at home.

Williams was captured after he walked into the police station on Longwood Avenue and started shooting before 8 a.m. Sunday.

Other officers returned fire but did not hit the suspect.

Surveillance video shows Williams apparently firing at police personnel before he ran out of bullets. He then laid down and slid his pistol across the floor.

PBA President Pat Lynch thanked the judge for remanding Williams, thanked the Bronx District Attorney's Office for obtaining the indictment, and thanked the people on the grand jury.

Lynch said recent talk of threats against police officers is "not unusual for those of us who have a shield on our chests. We deal with those threats on a regular basis."

In a 2002 case, he shot a person, carjacked a woman, crashed her vehicle, and then got into a shootout with police, according to officials.

Williams is due back in court on March 6. 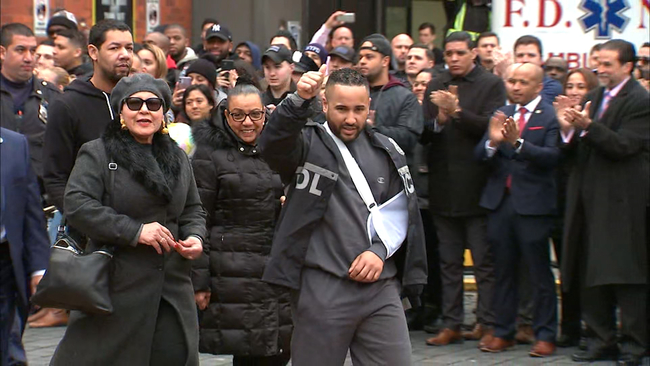