7 On Your Side: 'Dangerous' walk to school for 11-year-old student in New Jersey 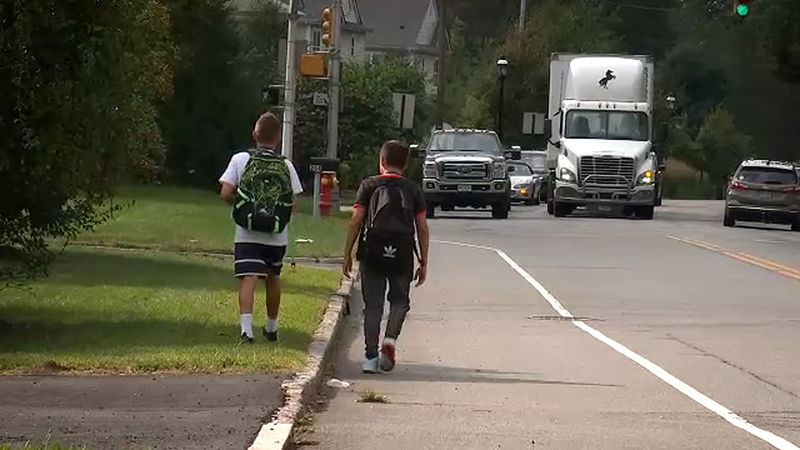 7 On Your Side: 'Dangerous' walk to school for 11-year-old NJ student

WEST CALDWELL, New Jersey (WABC) -- There is a busing battle in New Jersey between the parent of an 11-year-old and the town's school administration.

The issue? No buses are provided to kids within two miles of the school. The problem? A growing chorus of parents say the walk to school is downright dangerous.

"I'm scared that a car is just going to come up while I'm in the middle of the road, I start shaking," said one 6th-grader.

"I get nervous," said his friend Dominick Caputo as the boys showed us the route they would walk to school.

It includes a 4 way, 16 lane intersection with no crossing guard, no sidewalk and no shoulder along several stretches.

Then there's Clinton Road, heavily trafficked by 18 wheelers. He would have to dodge to get to the other side, alone.

"It is a truck route," said Dominick's mom Lorraine Caputo. "It is. It goes straight to 46, a 40 mile per hour road. Obviously people go much faster than that."

The rule in New Jersey is that kids who live within two miles of the school and don't have to travel along hazardous routes don't qualify for busing. The Caputos' house is 1.9 miles from the school.

Both the state and Caldwell-West Caldwell school district policy requires courtesy busing and designated bus routes of students who must walk to and from school along hazardous routes.

Lorraine pulled the police records and sent them to West Caldwell Superintendent James Heinigg this summer. There have been 60 accidents on her street so far this year

We asked what he had done about it. He said he:
--*Hadn't investigated this walking route

He claimed "parent concerns about traffic safety were shared with local officials."

But local officials say they had not heard from the super until last Friday, long after we began asking questions.
"I was surprised because I didn't know anything about the situation," said West Caldwell Mayor Joseph Tempesta. He said he agrees with Mrs. Caputo that the route is dangerous and no kids should be walking it, saying it's a safety issue.

West Caldwell's acting police chief Dennis Capriglione said: "I would not want my child walking that route. If the school contacts me, which they have not, I have no problem telling the superintendent I think it's dangerous."

The superintendent's solution? He found a seat on the bus. But there's a catch - since the Caputos live within two miles, it's going to cost the family an extra $1600 per year.


Report a correction or typo
Related topics:
school bus7 on your sidetraffic
Copyright © 2022 WABC-TV. All Rights Reserved.
7 ON YOUR SIDE
Baby formula scams are skyrocketing: How to avoid getting duped
United cancels couple's flight, charges $4K more for same seats
529 Plans - How they can help you save/pay for college
7 On Your Side helps grieving mom fight for daughter's death benefits
TOP STORIES
Man fatally shot while riding Q train into Manhattan
Mayor declares state of emergency in NYC over baby formula shortage
3 people killed in crash near catering hall on Long Island
Body of teen who disappeared while swimming in NJ reservoir found
Something strange is happening with our universe: NASA
NYPD searching for man behind Harlem stabbing
AccuWeather: Cooler start to the week
Show More
Buffalo mass shooting victims laid to rest one week after tragedy
Israeli flags fill Upper East Side for 'Celebrate Israel' Parade
78,000 pounds of infant formula arrives in US
NJ police impose curfew after large party gets out of hand
Suspect breaks into NYC apartment, stabs man to death
More TOP STORIES News