7 On Your Side pins medals on a Korean War vet, 52 years later 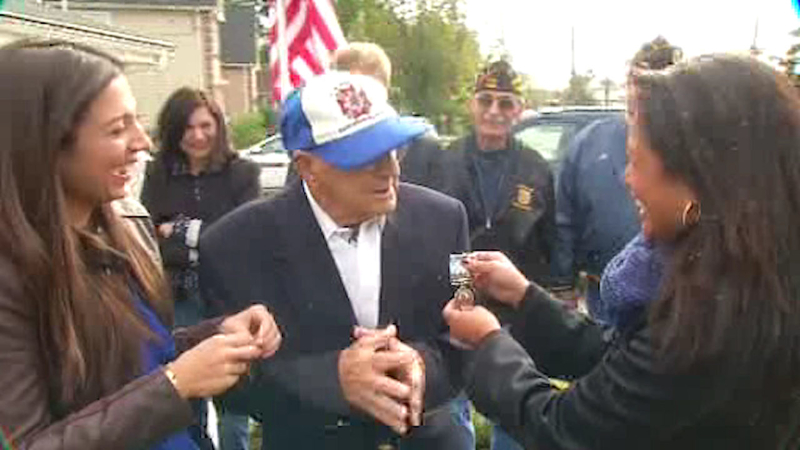 NEW YORK (WABC) -- On this Veteran's Day, a surprise for a man who has done so much for veterans in his community.

"I'm not scared to open my mouth. I speak my truth. I'm an American," said John Scala, whose outspoken nature earned him the nickname Mr. South River.

He's a fixture at every council meeting. He fought to build a new VFW and volunteer firehouse, and even led his town's Memorial Day parade this year.

Now the 88-year-old is on his final mission, to try and find something missing for more than half a century.

"Where are my medals? If I knew where the hell my medals were, my niece wouldn't go through the trouble she's going through," says Scala.

His niece, Jamie Jablonowski and her mom discovered last spring yellowed discharge papers listing the U-S Army Corporal earned not one, but three medals for his service in the Korean War, delivering ammunition to the front lines.

John says he tried on his own for years but gave up trying to get his medals. But when his wife died this spring, just shy of their 62nd anniversary, his nieces decided to fight the battle for him.

"I just thought it was incredibly unfair that his service to our country had gone unrecognized," said his niece, Jamie. "I'm super, super proud of him."

We met Mr. Scala in September and made him a promise to do everything we could to get him his medals.

So we contacted the U.S. Military Personnel Records in St. Louis. And thanks to some incredibly helpful assistance there, a six month process was fast-tracked.

We gathered local leaders, VFW friends and family to surprise him. The spry 88 year old was choked up, "I don't believe I got em after all these years," he said.
Related topics:
warveterans day7 on your side
Copyright © 2021 WABC-TV. All Rights Reserved.
7 ON YOUR SIDE
Dry cleaner disappears after taking brides' wedding dresses, deposits
What to know about holiday shipping deadlines, delays
Giving Tuesday: 7 On Your Side tips to avoid getting scammed
Cyber Monday deals: Strategies to shop and save big
TOP STORIES
CNN fires Chris Cuomo for role in aiding brother with scandal
2nd victim stabbed near Columbia was visiting student doing research
COVID Updates: 3 more cases of omicron found in NY
Man fatally shot in the neck in lobby of Bronx building
Knifepoint robbery suspect wanted for mugging student in NYC school
Homeowners burn down house in attempt to get rid of snakes
Mayor: Supervised injection sites have reversed 9 overdoses in NYC
Show More
Police search for gunman after 2 men shot on subway train
Parents charged in school shooting arrested, plead not guilty
1 person killed in New Jersey house fire
How unusual to charge parents in school shooting? EXPLAINED
Biggest, brightest Christmas tress in the US: LIST
More TOP STORIES News