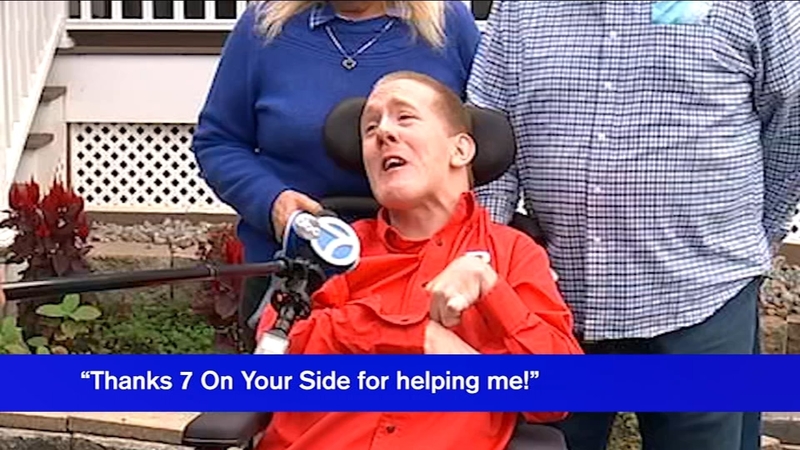 NEW JERSEY (WABC) -- With the coronavirus pandemic, remote working and a divided country, it's an understatement that the 2020 election has been like no other.

In New Jersey, where nearly all votes will be cast by mail, the changes come with many challenges. But what if you're a voter who no longer has use of their hands? How is your vote cast?

One disabled voter reached out to 7 On Your Side after he says his vote wasn't going to be counted.

Anthony Bonelli has never been able to use his hands, but that hasn't stopped him from voting the last three elections.

"We live in country that's a democracy, and every voice should be heard," he said.

But now, with Election Day just days away, the sportswriter and basketball coach fears his vote will get benched because he can't use his own hands to mark his mail-in ballot.

As a preemie baby, Bonelli stopped breathing. As a result, Cerebral Palsy affected only his speech and motor skills since he was just 10 days old.

"I've been fighting for him since he was born," mom Diane Bonelli said.

His last article was syndicated and published in a magazine for the Basketball Hall of Fame.

In past elections, his mother, who has legal standing as his "Durable Power of Attorney," has helped him vote in person.

But last July, the pandemic made primary voting all mail-in/absentee. So she filled out her son's ballot per his instructions a month later.

Then, they got a letter from his county board of elections stating, "Unfortunately, your ballot was not counted for the following reasons: Power of attorney can't be used for voting."

"Anthony should have the right, just like any other citizen in this country, to vote," Diane said.

The Bonellis are now battling with the county and state Division of Elections, waiting since the summer primary to ensure Anthony's vote won't be thrown out again.

"I shouldn't have to fight this hard for things that are his inalienable rights," Diane said.

We contacted the county and state, asking they solve this problem not only for Anthony but for any disabled voter who can't cast a ballot by him or herself. The state came through, crafting a new legal document to assist voters like Anthony.

During our interview, an email from the director of the New Jersey Division of Elections arrived with an attachment: A certificate allowing another to cast a vote for a person with disabilities.

"Thanks 7 On Your Side for helping me," Anthony said.

His hope is that others won't have to jump through hoops for their right to vote.