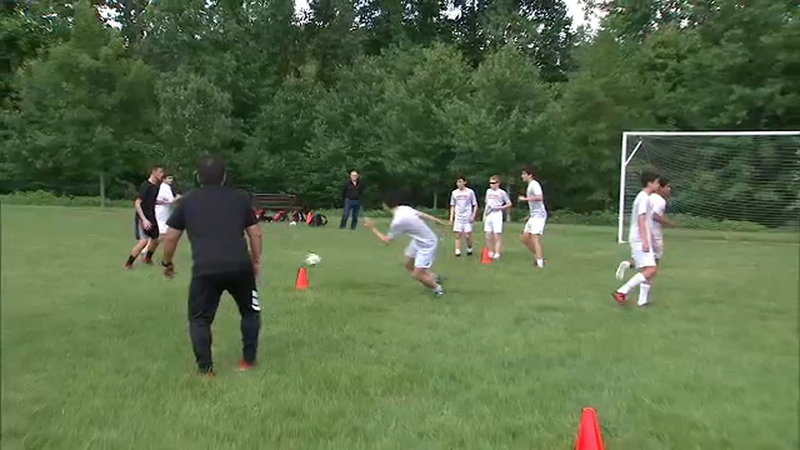 NEW YORK (WABC) -- It's a northern New Jersey non-profit that does everything from raising money for earthquake victims to helping teach kids to speak Itallian.

And they also have a sensational soccer program for kids. But after their club made a $1600 mistake, this band of ballers couldn't budge its toughest foe.

"One thousand six hundred and sixty four dollars and 99 cents." That's the amount Frank Giuliano says is gone good bye from his soccer club's coffers. "Where did it go? I have no idea," he said.

The big-money mix up has put his football non-profit in peril. The AC Milan Club has been Frank's passion for the past 14 years.

"It's a great experience, they treat the players like family," says one of its players, Carlo Aliotti. AC Milan is a top notch club, made possible by parents, fundraising and a high profile annual gala.

"We're trying to raise money to cover coaching, referees, tournaments and a camp we do for the kids," says Head Coach, Rene Moran.

Last January the club closed its AMEX account, switching to Visa. One of their first purchases was a new fridge for their clubhouse.

But their treasurer made a big buck blunder, sending the pay-off to the closed AMEX card, not their Visa. But even with no valid account, AMEX still cashed their check.

And when Frank called, he said he spent hours and hours on the phone. And for more than three months, Frank says AMEX couldn't find the money.

So we used some of our fancy footwork, contacting the credit card giant.

And there it was just days later, a check for the full amount.

The big takeaway: Frank's treasurer ran into trouble when he used an obsolete payee in his online banking. So it's not a bad idea to do some late spring cleaning - and clear away all your old accounts so you don't make the same mistake.

If using the app, click here to send us a news tip
Report a correction or typo
Related topics:
personal financesoccer7 on your sidefinancecredit cards
Copyright © 2022 WABC-TV. All Rights Reserved.
7 ON YOUR SIDE
7 On Your Side: Tips for ordering your at-home COVID tests safely
Woman wrongfully fined $259K for neighbor's violations in NYC
7 On Your Side tips to dig out of credit card debt
Fake at home COVID tests are out there - how to spot them
TOP STORIES
Burglary suspect dies after police shooting in Bronx
18-year-old taking groceries to grandma killed by stray bullet in NJ
AccuWeather: Frigid Friday
10-year-old child struck by vehicle in Queens; Driver in custody
FDNY, NYPD perform water rescue saving two children from frozen pond
Teachers union says LI district not enforcing mask mandate
Man shot in leg during robbery in Brooklyn
Show More
Watch NatGeo documentary 'The First Wave' free for 48 hours
Long Island high schooler bowls perfect game 2 weeks after 299
American Airlines flight turned around over maskless passenger
Adele postpones Vegas residency due to COVID among crew
FBI issues new warning on QR codes
More TOP STORIES News
Send us your questions, issues, and story ideas to Nina by filling out the form above, by emailing 7OnYourSideNina@abc.com, or contact Nina on her Facebook page or tweet her at Twitter @7OnYourSideNY! You can also call the 7 On Your Side Hotline at 917-260-7697.