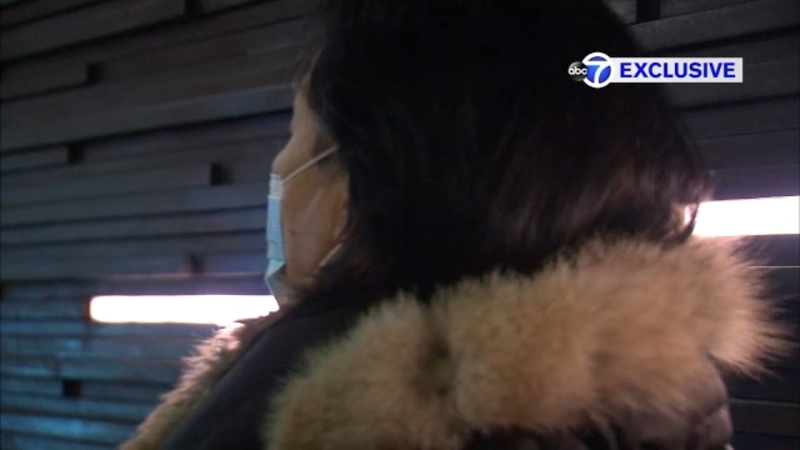 NEW YORK CITY (WABC) -- A woman is speaking out after a random unprovoked attack on a subway train left her battered and bruised.

"Just with his right hand, punched my left side face," the victim said. "Hurt and blood, bleeding."

A 71-year-old woman says the suspect didn't say a word as he walked right up to her sitting on a moving E train and then slugged her in her face.

In this Eyewitness News exclusive, she says she tried at first to chase her attacker.

The suspect is said to be a man in his 40s wearing a blue jacket, black pants, and a black mask.

She says it happened while the train was at 53rd Street moving between 5th and 7th Avenues just after 11 a.m.

The NYPD is not investigating the assault as a potential hate crime, but she says there's no doubt in her mind that this attack was racially motivated because she says two smaller non-Asian women were sitting next to her -- yet she was singled out.

The 71-year-old victim will be ok physically, but psychologically, she's shaken.

In fact, she's one of two Asian seniors assaulted in unprovoked attacks on the subway on Tuesday.

In the first incident, a 68-year-old woman was punched on the back of the head around 6:50 a.m. on the northbound A train platform at 125th Street and St. Nicholas Avenue.

The perpetrator, described as a man in his 20s, fled the scene on foot.

The two attacks are just the latest in a string of subway crimes that has prompted the NYPD to add more than 600 officers to the transit system.

This is unacceptable. We will NOT tolerate violence on our subways.

I rode the subway yesterday and added over 500 officers to the beat. We will make sure public transportation is safe for all New Yorkers. https://t.co/N1KT230FBd

Last weekend, a homeless man allegedly stabbed and killed two people on the A train.

Police say they used surveillance video and a victim's statement to track down 21-year-old Rigoberto Lopez, who has a history of mental illness.

RELATED: Subway stabbing suspect had knife on him when he was arrested
EMBED More News Videos

Another man was stabbed on the 1 train platform at Christopher Street last week, and in January, police body camera footage showed the moment someone tried to shove a woman in front of a moving train.

Other recent incidents also include a February 3 slashing in the East Village, where Noel Quintana received a face laceration on the L train.

"I was scared because I thought I was going to die," he said. "And nobody helped me."

Police say they will be riding trains more frequently, and the MTA is calling for even more officers in the subway system.

They say the real crisis has to do with the number of mentally ill people roaming free underground.

The MTA released the following statement after the most recent assaults:

"Our thoughts are with the victims of these horrible attacks. The NYPD's recent increase in Transit Bureau officers into the subway system is a welcome first step. But we continue our call for an additional 1,000 officers - to address this recent uptick in crime and to bring transit policing back to the level it was when the NYPD took over responsibility for keeping riders and transit workers safe. We also reiterate the urgent need for increased mental health resources in order to get these vulnerable New Yorkers to appropriate services."