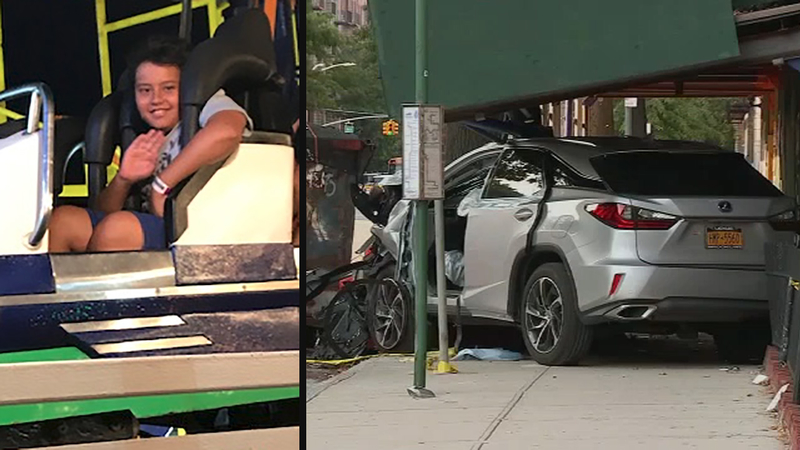 MIDWOOD, Brooklyn (WABC) -- There were calls for action Thursday night over the dramatic increase in pedestrian and cyclist accidents in Brooklyn, the most recent involving the death of a 10-year-old boy.

"We lost our baby and he's not coming back," said Mary Majao, whose son Enzo was at a bus stop on Ocean Avenue Wednesday when a car flew out of control, jumped the curb and slammed into him before hitting scaffolding down the block.

The crash in Midwood happened so fast, police say Enzo may never have seen it coming.

"Waiting for a bus on your way home from school should not be an action that could lead to your death," said Erwin Figueroa of Transportation Alternatives.

At the spot where Enzo died, safe streets activists demanded change, in a part of Brooklyn where traffic fatalities this year have skyrocketed.

"These are preventable tragedies and we have to do everything we can to fix it," said City Council Speaker Corey Johnson. "But we have a city that was built for cars, and not for people."

In this case police believe the driver was incapacitated by a medical episode that led him to lose control.

Short of banning cars altogether it isn't clear what if any changes to the street design could have saved Enzo's life.

But advocates say too many streets are just too dangerous for pedestrians and cyclists, and Enzo is just the latest sad statistic in a crisis that keeps getting worse.