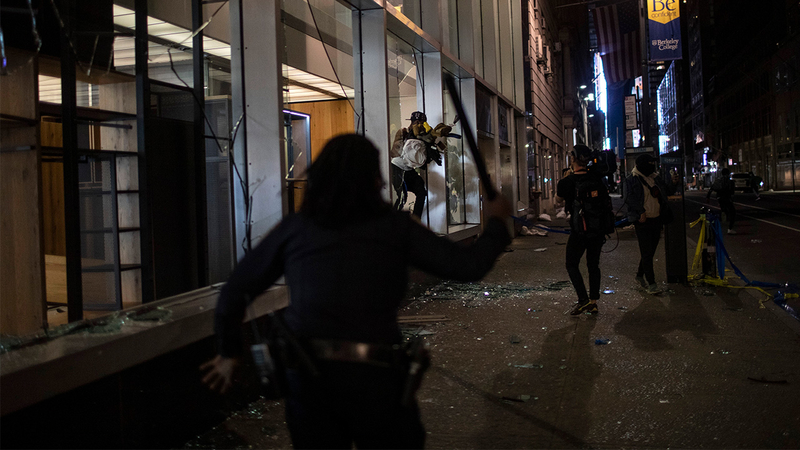 MANHATTAN, New York (WABC) -- New York Governor Cuomo sharply criticized the NYPD's response to widespread looting across New York City on Monday night saying "the NYPD and mayor did not do their job."

"I am disappointed and outraged what happened in New York City, that looting and criminal activity hurt everyone in the communities of the protests," he said. "The police in New York City were not effective in their job last night. Period."

Josh Einiger reports stores on the Upper East Side were vandalized by looters when the sun went down on Monday night.

"He dishonored the men and women of the NYPD in an absolute inappropriate way for any elected offical who blames the NYPD while they were out there fighting on the streets in order to protect people, and I think that's disgraceful," de Blasio said. " I think he owes an apology to 36,000 hard working men and women who have been putting their lives on the line fo us."

Cuomo said the National Guard and State Police are on standby and remain ready to support the NYPD if needed.

At his daily briefing, Mayor de Blasio said the National Guard should not be brought to New York City, saying the 36,000 NYPD officers are best equipped to deal with this situation.

"When outside armed forces go into communities, no good comes of it," De Blasio said.

Cuomo responded by saying he believes de Blasio underestimates the scope and duration of the problem.

"It was a disgrace," he said. "What happened in New York City was inexcusable."

Cuomo said he believed the NYPD could handle the situation because they have protected the city before in these situations.

"I believe in the inherent capacity of the NYPD if managed and deployed. That's what I think hasn't work. That has to be fixed and it has to be fixed today. Stop the looting," he said. "I do think the NYPD if well deployed wouldn't need the National Guard. They are trained to do this."

Even President Trump weighed-in on Twitter, calling for the deployment of the National Guard.

NYC, CALL UP THE NATIONAL GUARD. The lowlifes and losers are ripping you apart. Act fast! Don’t make the same horrible and deadly mistake you made with the Nursing Homes!!!

The mayor was defensive even before all this, saying "They don't believe in our police officers. To hell with all of them. I don't care if they're left or right or center, I am sick of people attacking the city of New York."

Police said nearly 700 people were arrested and several officers were injured during the chaos Monday night and early Tuesday.

As the day dawned, the city appeared to have made progress limiting violent clashes between police and large groups of demonstrators marching throughout the city over the death of George Floyd.

Several big marches went off peacefully, with one hours-long demonstration in Brooklyn allowed to continue long after an 11 p.m. curfew. But for a second night, roving bands of young people attacked businesses in Manhattan's glitzy shopping districts and a poor neighborhood in the Bronx, where shops were looted and rubbish set on fire.

"We're going to have a tough few days. We're going to beat it back," de Blasio said as he announced that an 8 p.m.-to-5 a.m. curfew would hold through Sunday.

The mayor also pleaded with every day New Yorkers to help.

"Members of the clergy come out now. I'm calling you out. Civic leaders, block associations come out now and stand up for peace," he said.

Both Cuomo and de Blasio agreed on one thing. They reiterated concerns that protests could lead to the spread of the COVID-19 and urged demonstrators to use precautions.

NY Gov. Cuomo slams NYPD for failing to protect the community from looters