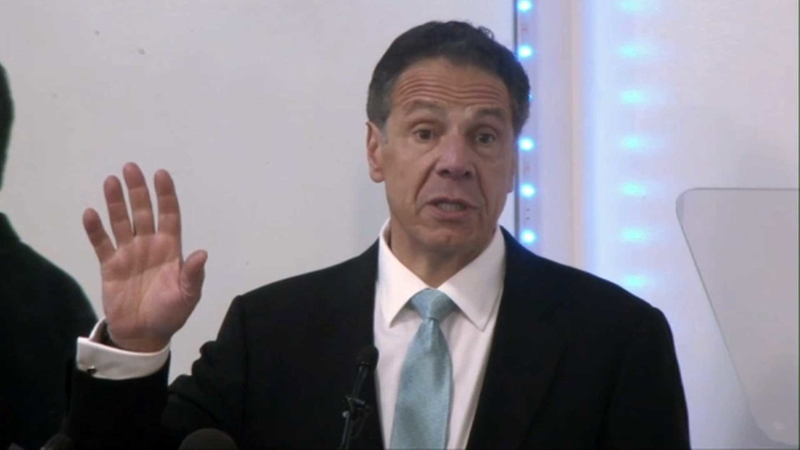 Cuomo offered no new insights on his political future in his second appearance since his reemergence in the public eye earlier this month.

During an hour long address in the Bronx, Cuomo instead offered three points of guidance to politicians:

And in a new proposal befitting a politician potentially considering a run, Cuomo called for the state to use newly available funds to suspend its portion of the gas tax, a proposal Gov. Kathy Hochul has only said she is considering.

Cuomo resigned last summer amid sexual harassment allegations and after a damning report from Attorney General Letitia James, but all district attorneys investigating the claims have said that while they find them credible, they will not being pursuing any criminal charges.

Since then, Cuomo has re-entered the public spotlight, and on Thursday, he framed his fall from power as "cancel culture" run amok.

The Democrat behaved like a candidate, posing for pictures with attendees and a baby, and asked after his speech if he would run for office, Cuomo told reporters he is "open to all options."

He wouldn't say whether he was thinking about challenging Gov. Kathy Hochul, his former lieutenant governor and successor, but he ripped the state's current governance during his speech.

Cuomo indicated he was open to possibly gathering enough petition signatures to get on the ballot in the general election, a step that would allow him to bypass the Democratic primary in June.

"I know how to get on the ballot, I did it a couple times," Cuomo said. "The election isn't until November. So there's a lot of time to gather petitions, depending on how you want to run."

The former governor did not directly address the specific allegations on Thursday or make any apologies. He accused "extremists" in the Democratic Party of orchestrating his downfall because they felt he was standing in their way.

"There are people who wanted to run against me," he said. "They wanted my job, and they used this opportunity to help themselves politically."

Last month, his team launched a new advertisement in what appeared to be an attempt to clear his name.

The 30-second ad, titled "Politics vs. the Law," claimed Cuomo has been exonerated from charges he sexually harassed multiple women.

The ad fueled speculation he might one day run again for public office.

In response to the ad, Attorney General Letitia James issued a statement strongly condemning it.

"The only thing Andrew Cuomo has proven himself to be is a serial sexual harasser and a threat to women in the workplace, no TV ad can change that," she said. "It's shameful that after multiple investigations found Cuomo's victims to be credible, he continues to attack their accounts rather than take responsibility for his own actions."

In addition, nine women's rights organizations called on Cuomo to take responsibility and accused him of spreading misinformation.

Cuomo, who had long planned to run for a fourth term in 2022, reported $16 million still in his campaign fundraising account in January, giving him an ample start to mount a campaign. That includes potentially gathering signatures from voters.

Speaking to his Bronx audience Thursday, Cuomo made it clear that, whether he runs or not, he has no intention of quitting the public stage.

"I am not going anywhere. I am going to continue to fight the good fight," he said.