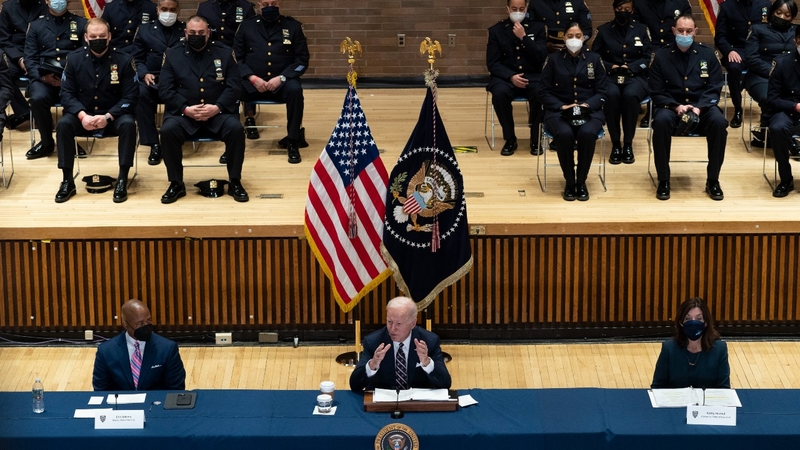 NEW YORK CITY (WABC) -- President Joe Biden arrived in New York on Thursday afternoon amid an onslaught of violent crime that has made national headlines.

The president seemed determined to strike a balance. He met with both officials and community leaders to demonstrate that there is more to fighting crime than arrests and prosecutions.

Biden and Attorney General Merrick Garland started their visit to NYC by at NYPD headquarters to offer federal support to Mayor Eric Adams' and New York Gov. Kathy Hochul's plans to crack down on illegal guns coming into the state.

At One Police Plaza, Biden watched the daily meeting of the NYPD and officials from about a dozen law enforcement agencies that Adams has cited as successful communication about guns and crime.

"Yesterday, we gathered at St. Patrick's Cathedral in mourning," Adams said. "Today, here at One Police Plaza-where I walked across that stage as a captain-we are here in solidarity to deal with the issue of violence that has become pervasive in not only New York City, but in the cities across America."

The president promised an intensified federal effort to shut down the flow of illegal guns to the streets of New York.

"Today the attorney general directed all U.S. attorneys in the United States to prioritize combating gun trafficking across state lines and city boundaries," Biden said. "The Justice Department is sending additional prosecutorial resources to help shut down what's referred to as you all know in the 'Iron Pipeline.'"

Biden said money is being made available for community outreach programs-intended to short-circuit conflicts before they become violent. And that additional funding will help pay for hiring more officers and police overtime.

"The answer is not to defund the police, it's to give you the tools, the training, the funding to be partners, to be protectors and community leaders," Biden said. "To know the community, you know. Police need to treat everyone with respect and dignity."

The group then headed to a school in Queens, where they met with local violence interrupters to discuss local efforts to stop gun violence.

Queens Borough President Donovan Richards was among several elected officials and community leaders to meet with the president in Long Island City.

"The President is right on the mayor's right on the governor and addressing the 'I-95 Pipeline,'" Richards said. "There are no gun manufacturers in the Queensbridge Houses, nor Baisley, nor Redfern Houses in the Rockaways. And they need to be held accountable."

At the school in Queens, Biden largely listened as several attendees talked about the role of community liaisons and ambassadors.

Violence interrupters who work in the streets to short-circuit conflicts before they become violent and work to prevent the kinds of shootouts that happen practically every day in New York. Mr. Biden has promised to increase funding.

"When you take a young person and you say, 'Let's get your 10-year plan, let's work on your three-year plan and your one- year, let's set benchmarks,' that's goal-setting," said K Bain, executive director of Community Capacity Development. "It sounds simple, Mr. President, but it's not happening in our communities enough."

Adams has previously cited on the ground community collaboration as one of his keys to stopping crime and Biden has long been a proponent of community policing.

Biden also called on Congress to pass his appropriations package that includes half a billion dollars for community policing and violence intervention -- trying to not just fight crime but stop it from happening.

"We need more social workers, we need mental health workers, we need more people who when you're called on these scenes, and someone's about to jump off a roof, is not just someone standing there with a with a, with a weapon," Biden said. "It's someone who also knows how to talk to people, talk them down."

Officer Jason Rivera, 22, died the night of the shooting. His partner, Wilbert Mora, 27, was removed from life support four days after the officers were fatally wounded after they were called to an apartment by a woman who said she needed help with her adult son.

Biden's visit comes the day after thousands gathered to bid a final farewell for Mora's funeral.

So far, six NYPD officers have been shot this year, including an off-duty officer who was shot in Queens Tuesday night.