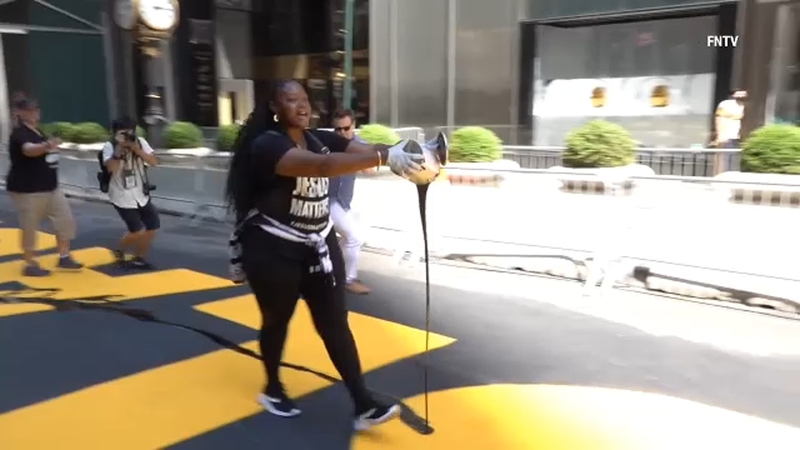 MIDTOWN, Manhattan (WABC) -- Two women were arrested for their alleged involvement in vandalizing the Black Lives Matter street mural, which caused an officer to slip and injure himself, in front of Trump Tower Saturday.

The mural was vandalized twice in one day -- for a total of four times in one week.

In the first incident, black paint was splattered all over the mural just after 3 p.m. Saturday.

Bevelyn Beatty, 29, and 39-year-old Edmee Chavan, both of Staten Island, were arrested and charged with criminal mischief. They were both given desk appearance tickets and were released.

The officer was injured after slipping on the paint that was poured on the mural. He injured his arm and his head and was taken to Bellevue Hospital.

A city spiraling out of control and elected officials who couldn’t care less. New Yorkers in every neighborhood and the brave cops who protect them deserve better. Thankful our fellow officer will recover. pic.twitter.com/wUPpQJx1lk

In the second incident at Trump Tower Saturday, authorities say a 42-year-old man threw paint on the mural later in the day just before 6 p.m.

The Black Lives Matter mural painted in front of Trump Tower on Fifth Avenue has been vandalized for a third time this week.

Police are looking into whether or not the women arrested at Trump Tower are also responsible for the Harlem and Brooklyn incidents.

"We were certainly aware of the attacks on the murals as a new trend. But we felt sure no one would come to Harlem to purposely do this. We know where our hearts were in creating this mural for Harlem and we also know how much love and support it received. This was not a political statement as much as it was an embrace of a community that we as Black women felt really needed it," said Nikoa Evans Hendricks, Executive Director, Harlem Park to Park.

This weekend was not the first time the mural at Trump Tower was vandalized. It was also vandalized on Friday afternoon.

Police arrested Juliet Germanotta, 39, Luis Martinez, 44, and D'Anna Morgan, 25, and charged them with criminal mischief in connection to Friday's incident. They were released with a desk appearance ticket.

A few hours later, the mural was repaired by DOT crews.

The first incident happened on Monday. Police are still looking for one person in that case who walked up to mural and dumped red paint over the letter V in "Lives," which splattered across the mural as cars drove over it.